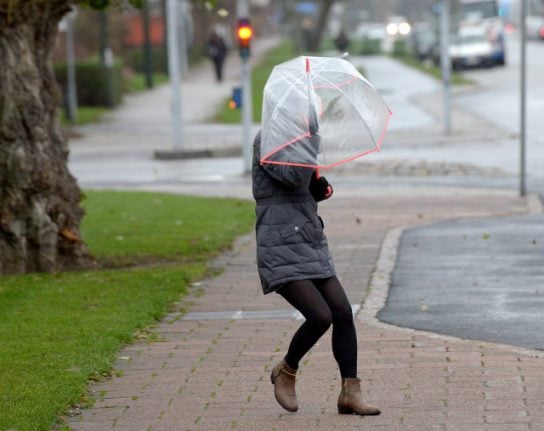 It could be a tricky day for umbrellas in some parts of Sweden. Photo: Johan Nilsson/TT

SMHI has issued a class-two weather warning (the medium level on a scale from one to three) in northern parts of the country, warning of winds of between 79-97 km/h in Norrbotten county.

When combined with snowfall which is also expected in the hilly regions of the area, the weather could create tricky conditions.

“It is so windy that it is difficult to walk upright when you have storm-force wind speeds. There is a risk that loose objects can be caught in it and high vehicles could topple. It’s worth being careful. If it’s possible to stay indoors, that’s recommended,” SMHI meteorologist Lisa Frost told news agency TT.

The cause is low pressure moving in from the North Sea, which will bring strong winds from Wednesday afternoon onwards. Less serious class one weather warnings have also been issued for the Västerbotten and Jämtland counties further south.

National rail operator SJ has cancelled several trains on the Luleå-Björnfjället line due to the weather, tabloid Expressen reports, and rail passengers in northern Sweden have been advised to check with train companies before travelling.

The weather is expected to improve from Thursday onwards.