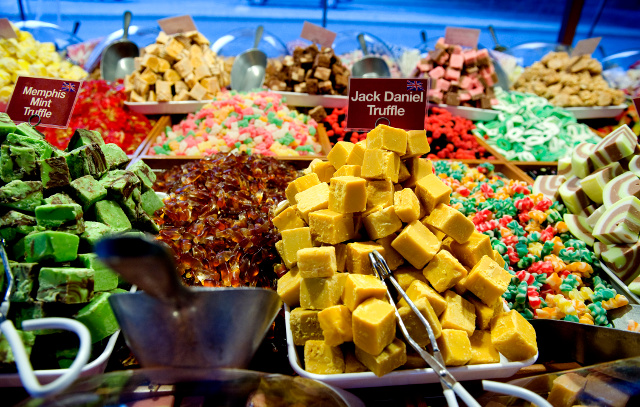 In the heart of Kista Centrum you can find the Caspian Supermarket, a Persian grocery store packed with produce, cured meats, rice and nuts. Tehran-native Azin Dadgar specifically recommends it for their pastry shop with freshly-baked baklava.

With three locations in Stockholm (Södermalm, Kungsholmen and central Stockholm), Tabbouli is the place to go if you're looking for Lebanese cuisine. Tabbouli serves a large variety of chicken, lamb and ox dishes, vegetarian courses such as falafel and salads, desserts, and Lebanese wines.

If you're looking for a place with wide variety of imported vegetables, fruits, spices, breads, nuts and canned goods from the Middle East, visit Reorient Mataffär (directly translated as Reorient Grocery Shop) on Södermalm island. Doubling as a restaurant and a grocery store, it serves vegetarian meze with Turkish inspiration.

A bit outside of Stockholm City is Kista Grossen, a food store with a wide selection of various international food which could fit in just about any category on this list.

Travel down the red line to Aspudden Centrum where you can find Lord Afrique, an African grocery store which aims to “bring Africa into Europe, or rather, take the European to Africa”. Everything from poultry and grocery to malt drinks can be found here, as well as Nigerian films. They are currently closed for renovation work but will be back open in August.

For Ethiopian food, try EthioStar, a restaurant located on Saltmätargatan in central Stockholm, serving dishes with various vegetables and meats as well as vegan alternatives. Here you can partake in a traditional coffee ceremony, a staple of Ethiopian culture.

American native and writer of the Swedish culture site Stockholm Lokal, Erin Bonnier, recommends the restaurant Flippin' Burgers, located in Vasastan. It is probably the most hyped burger place in Stockholm, but Bonnier assures us this is here you can find “the authentic and tasty American burger, fries and milkshake experience”.

USA Godis, meaning 'American Candy', can be found in the Skrapan mall on Södermalm as well as online. This store carries American brands of candy, baked goods, cereals and drinks. It is perfect for Halloween fanatics, as there's even an online section which sells Halloween candy all year round.

Diego Planas Rego, a Mexican living in Sweden, says that “getting real Mexican food in Stockholm is not very easy, but if you look hard enough it is doable”. No need to look further: he approves of the restaurant La Neta, located both in Södermalm and Barnhusgatan, serving quesadillas, tacos and Mexican desserts.

Peruvian ceviche is one of the most recent restaurant trends in Stockholm, with several different cevicherias popping up in the past couple of years. Cevicheria Aji & Ajo on Södermalm claims to be the oldest and most genuine in Scandinavia – we'll let you be the judge.

If you are a Brit living in Stockholm, you probably already know of The English Shop at Medborgarplatsen, which despite it name stocks a wide selection of food from all around the British isles. Commenting on Facebook, The Local reader Katie Traver recommends it for “grocery items I miss from studying postgrad in Scotland”. After opening its very first store in 1993, it has become a heaven for Brits with everything from crisps (that's chips for our American readers) and sweets to frozen goods and baking. Oh, and tea of course.

Also on Södermalm island, as well as Odenplan, is Greasy Spoon, an all-British café nothing short of its name. This restaurant serves all-day breakfast and brunch with specialities of fried eggs, bacon, mushrooms, beans and tomatoes. The Local interviewed the owners here.

Stockholm's Old Town, Gamla Stan, may be a tourist trap, but there are gems if you know where to look. Naples-native Giulia Armiero has given Ristorante Paganini her seal of approval, as she finds their large menu of pastas, salads, pizzas and meat dishes “taste like home”. If you've had it up to here with what passes for a “pizza” in Sweden, try Pizza Hatt in Vasastan or Il Risotto in Årsta.

If you miss your continental sausages from home, try Günters Korv in Vasastan. Although this kiosk is small, its menu is huge, with sausages from Germany, Austria, Poland and Hungary.

French? The Local reader Emmanuelle Floquet recommends Picard, a frozen-food chain with 12 locations around Stockholm for seasonal French cakes, but says that many things can be found in Swedish grocery stores these days.

For all Aussies and Kiwis, try Tasman Cafe, in Vasastan. It mimics the café cultures of Australia and New Zealand, serving Australasian sandwiches, pastries and salads.

The above-mentioned English Shop actually works too, according to The Local France's Australian deputy editor Oliver Gee, who used to live in Stockholm. “Whenever I was hit by a yearning for Australian-style toast (or sandwiches), I used to hop along to The English Shop to stock up on Vegemite. They also have Tim Tams, which as anyone knows are the best chocolate biscuits on the planet,” he says.

Our Chinese readers will have to be the judges of the food, but whether it is a genuine taste of the home country or not, visiting the first Chinese restaurant that opened in Sweden (back in the 1940s) is likely to be a fascinating experience. Now specializing in food from all corners of Asia, Berns Asiatiska offers breakfast, lunch, dinner and brunch with Thai, Korean, Chinese and Japanese influences.

With every Swede talking about their holidays in Thailand, it's no wonder that Stockholm has a knack for Asian foods. There are several supermarkets in the city, including Korean Food on Luntmakargatan, JFK (Japan Food and Kitchen) on Swedenborgsgatan, and Asien Livs in Söderhallarna, Medborgarplatsen.

No need to leave your home for this one. Mrkt2Home.se is an online-based store specializing in Indian grocery. Here you can find everything from fruits and vegetables to spices, household items and clothing, including Churdidhar and Sarees. This store only ships to Stockholm-based customers.

The Local reader Meghan Shrivastava recommends Taj Mahal Livs on Drottninggatan, as well as Himalayan Livs near Tekniska Högskolan, for a large variety of Indian foods and spices. “I literally don't need to ask mommy to send anything from India,” she writes on The Local's Facebook page.

Our reader Riya Raju recommends NGroceries in Kista, which also does home deliveries, for their selection of Indian groceries.

Lilla Pakistan, directly translated as Little Pakistan, aims to offer a sophisticated menu with traditional Pakistani food. Located on St Eriksgatan, here you can dine on dishes such as chapati and lahori beef.

Originally from Kerala, Renjith Ramachandran, who set up Search Indie specifically to help fellow Indians locate their home comforts, suggests Indian Street Food as his top choice for the “most authentic Indian food one can eat in Stockholm”. They set up a food truck a couple of years ago and recently opened their first restaurant at St Eriksgatan. He also recommends Indian Garden and Shanti.

Article put together by The Local's intern Tilly Olsson. Thanks to everyone who contributed! This list was compiled based on our readers' recommendations, so if you can't find your favourite store or restaurant here, it's probably because you didn't tell us about it. If you know of any hidden gems selling food from a country not on the list, get in touch by e-mail, Facebook or Twitter.