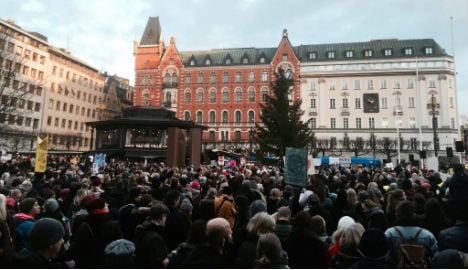 The crowd was estimated at between 1,000 and 2,000. Photo: Leo Rydberg/Facebook
Bearing banners such as “Pussy Bites Back”, “I’m with hen”, “Fight like a girl”, and “Keep your tiny hands off our rights”, the protestors filled the square to hear speeches by the feminist Liberal MP Birgitta Ohlsson, Anna Lindenfors, the head of Swedish Amnesty, Israeli-born left-wing activist Dror Feiler, the Left Party’s Jens Holm.

“Women’s rights are worth fighting for,” Ohlsson said in her speech.
The march, was arranged, amongst others, by Amnesty International, Svenska Freds, the Woman’s International League for Peace and Freedom, and the Swedish Federation for Lesbian, Gay, Bisexual, Transgender and Queer Rights (RFSL).
After the speeches, the protestors planned to march to the US embassy.
Sven-Erik Olsson, duty officer with the Stockholm Police, told The Local that the protest appeared to have been peaceful.
“I looked through the incident report, referring to these demonstrations and I couldn’t find anything. It’s been going on without any incidents of violence or anything else.”

Leo Rudberg, one of the protesters, estimated the crowd at “a couple of thousand”, a number Olsson would not comment on as the Stockholm Police no longer comment on attendance numbers at demonstrations.
“Today it’s extremely important to stand up for the rights of women and minorities,” Mia Sandström, a librarian, told Dagens Nyheter. “I think we’ve already seen proof that a new world’s order is coming.”
Economics student Elin Persson told the newspaper that she had felt compelled to join the protest after hearing  Trump’s nationalist inauguration speech on Friday.
“There are a lot of people here, which feels good, but I get a knot in my stomach when I think of what’s waiting for us,” she said.
An estimated 100,000 people joined protests against Trump, in London on Saturday, and at least 200,000 are expected at the main Women's March in Washington.