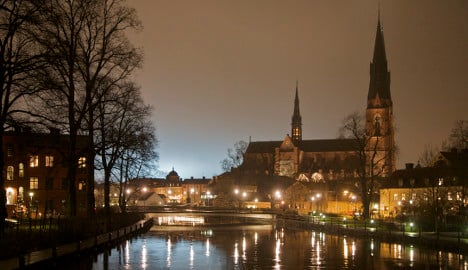 Uppsala Cathedral by night. Photo: Tusse/Wikimedia Commons
READ ALSO: Police hold press conference on alleged rape
According to Sweden's Aftonbladet tabloid, the alleged crime took place in an apartment in the city of Uppsala early on Sunday morning. The victim was reportedly close to unconscious.
Josefine Lundgren, 21, alerted the police at 8.24am on Sunday morning as soon as she realised what was happening on the closed group, of which she is one of 60,000 members.
“He tore off her clothes and lay down on top of her,” Lundgren told Expressen.
“You have been raped,” one of the men said to the woman at the end of the broadcast before laughing, according to the paper.  “Three against one, ha ha ha,” one of the members of the closed group then commented under the feed.
According to Sweden’s state broadcaster SVT, the men then made a second live broadcast in which she stated that she had not been raped, a broadcast which was still continuing when police arrived in the flat, arrested those present, and turned off the camera.
Marcus Svensson from the Uppsala police on Sunday afternoon confirmed that police had obtained a copy of at least one of the broadcasts, adding that there were also large numbers of witnesses.
“There are quite a few people who have got in touch who saw the broadcast,” he told SVT. The victim, he added, had been taken to hospital both for her own safety and to collect evidence.
“My heart broke,” Linda Johansson, who saw the second of the broadcasts, told SVT. “The girl was sitting in front of the camera while the guy who filmed her tried to make her deny that she had been raped.
“He was putting the words in her mouth. He was extremely threatening and laughed throughout the film.”
Another person who had seen the stream told the newspaper: “At first I thought it was a poorly orchestrated joke.”
“The first thing you think is ‘how can you do such a thing to a girl? And how can you do it live when you know that you are going to go there?'” another said. “I think of course it is screwed, totally sick.”
The men arrested were born in 1992, 1996, and 1998, making them between 19 and 25, younger than their victim, who was born in 1986, making her about 31. According to Expressen, the eldest of the men has previous convictions for drugs and violent assault.
The Facebook group has also previously triggered a police investigation, when a group of school children sent a live broadcast in which they threatened to shoot another pupil.