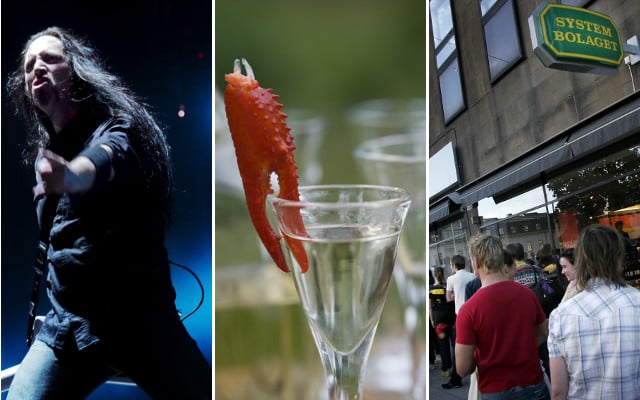 There are few things less 'lagom' than the Eurovision Song Contest, with its sickeningly sweet pop anthems, excessive outfits and absurd presenters. Yet the Swedes love the cheesy nightmare so much they've made it a virtually year-long affair.

While Eurovision proper takes place in May, the early stages of Sweden's qualifying process Melodifestivalen kicks off almost as soon as the previous final is over. Hopefuls submit their songs in the autumn, they're narrowed down, and the televised semifinals begin in February.

If that isn't enough, it's a touring event. So for six weeks, Swedes across the country get to see aspiring popstars compete to have the chance of possibly, maybe, perhaps becoming a one hit wonder. Before taking a brief pause and doing it all over again. Lagom. Does it ever end? Photo: Fredrik Sandberg/TT

2. Stureplan or Avenyn on a Friday night

Something which doesn't quite square up with the whole “lagom is Sweden's way of life” deal is that many Swedes really like to party. Big time. Take a wander to Stockholm's Stureplan or Göteborg's Avenyn on any given Friday night (in particular, the one following pay-day) and you'll be treated to an array of young folks having an exceptionally good time with the aid of their beverage of choice – or ten.

There's no moral judgement being made here, it's simply worth pointing out that the “not too much, not too little” ethos doesn't really apply. The scenes are similar to the ones you'd see in many other nightclub-filled areas in other cities across northern Europe at the weekend. The Trädgården night club on a summer's night in Stockholm. Photo: Helena Landstedt/TT

For anyone unfamiliar with Sweden's take on Christmas dinner, the julbord, it's essentially a gigantic all-you-can-eat buffet of fatty foods followed by sweet stuff and washed down with alcohol.

There are no light salads or quinoa to be found here: you'll be hit with wave after wave of fatty fish, cured meats, pâté, meatballs, sausages, cream casserole, and if you're really lucky, bread dipped in pork broth.

Then, there's cheese, dessert – often including Sweden's own heavy-duty version of rice pudding – and a few Aladdin or Paradis chocolates to top it off along with your coffee. It's enough to challenge even the most hardcore of Christmas-dinner eaters (present writer included), and definitely not particularly lagom.

READ ALSO: An idiot's guide to the Christmas julbord So. Much. Food. Photo: Robin Haldet/TT

Death metal is a genre of music characterized by its excess: the imagery is borrowed from horror movies, the lyrics tend to be morbid, the singing similar to the Cookie Monster from Sesame Street, and the music itself tuned so low it's barely detectable by a human ear.

Sweden not only loves the stuff, it has also been highly influential in the death metal world, inventing a sub-genre known as “the Gothenburg sound“, or melodic death metal. Bands with suitably un-lagom names like At the Gates, Dark Tranquility and In Flames helped put the western Swedish city on the map in the musical underground with albums like “Slaughter of the Soul” and “Whoracle”. It doesn't get less lagom.

Sweden's traditional late summer celebrations are known by the kind of food served at them, but they could just as easily be called “snaps parties”, so important is the consumption of strong spirits to the whole event.

The only thing that matches the mountain of shellfish eaten at one of these is the amount of alcohol chucked down your throat: glasses are filled, raised, songs sung, and the contents glugged down, over, and over, and over again. As Swedish TV presenter Lotta Lundgren so succinctly put it here, what are the best and worst things about a crayfish party? “That you usually get really drunk. And you usually get really drunk.” Nope, nothing excessive to be found here. Not at all. Photo: Claudio Bresciani/TT

6. Stuffing yourself with langos and riding rollercoasters

Langos, a Hungarian deep fried flatbread, is often served in Sweden with sour cream and cheese. To state the obvious it's not particularly good for you, and for some reason, in the Nordic nation it seems to appear almost exclusively at festivals and amusement parks.

Two particular Swedish langos hotspots are Stockholm's Gröna Lund and the bigger Gothenburg equivalent Liseberg, where every summer without fail, teenagers will regularly pile in, munch on the greasy dishes, then take the risk of riding some rollercoasters afterwards. It's a dangerous business, particularly if you suffer from motion sickness, but the young Swedes seem to love the not very lagom thrill of it all anyway.

7. Systembolaget before a public holiday

Sweden's state-owned alcohol monopoly Systembolaget is the only place to buy anything with an alcohol content above 3.5 percent, and handily, it's closed after 7pm on weekdays, after 3pm on Saturday, and all day on Sunday, sparking a mad, stress-fueled rush to stock up in the final hours before it shuts up shop.

The one time with the maximum potential for spotting a not-so-lagom Swede at Systemet though is before a public holiday, and in particular Midsummer, when the alcohol shop closes for a terrifying three days in a row.

So turn up, sit back, and watch as the “not too much, not too little” Swedes stock up on so much booze you'd think they were preparing to go into an underground bunker and sweat out a fictional Russian invasion for the next three months. It's pretty amusing. Provided you remembered to buy your own drinks beforehand.

8. Bill Murray, when he comes to visit

This one isn't strictly Swedish, but it's worth including because it's probably one of the least lagom incidents to occur ever, and it took place in Sweden.

In 2007, when Hollywood actor and lover of a good time Bill Murray was in the country to play some golf, he celebrated by going out in Stockholm, throwing back a few drinks, then jumping into a golf car with more people than it could possibly take, attempting to zigzag his way back to his hotel. On the sidewalk.

“I ended up stopping and dropping people off on the way like a bus. I had about six people in the thing and I dropped them off one at a time,” he later recalled.

The police spotted the altruistic chauffeur, pulled him over and asked him to take a breath test – which he refused – then took him along to a police station for a blood sample instead, before finally letting him go without arrest.

A decade later, for better or for worse, Murray's amateur taxi has yet to return to the Swedish capital. You can watch him explain the series of events to David Letterman in his own words below. Note how he describes his fellow Swedish party-goers: “They don't quit. They don't quit over there”. If Bill Murray thinks you party hard, you're definitely not lagom.