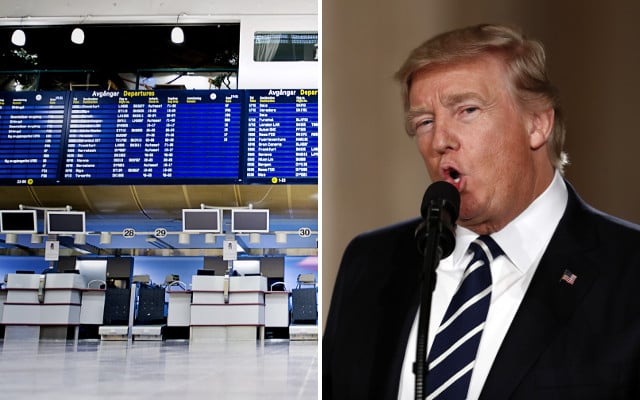 Flygresor.se analyzed 2.5 million flight searches carried out on their website and app, focusing on the two weekends following Trump’s inauguration on January 20th, 2017.

And while the company usually expects an increase in searches for trips to America at that time of the year as Swedes start to plan their summer vacations, instead, the opposite happened after Trump was sworn in as US President.

“Normally, we would expect a rise in interest for destinations in the US now, since searches usually surge 2-3 months before the actual departure dates, and spring and summer have the most trips to the US from Sweden,” Flygresor.se marketing head Kristoffer Rengfors told The Local.

During the first weekend after Trump's inauguration, searches for trips from Sweden to the US accounted for 43 percent fewer of the total number made on the site compared to the same period in 2016. The share then dropped to 47 percent fewer – almost half – during the second weekend after he had been sworn in.

“47 percent is a huge difference in comparison to what would be normal for the season. The drop in interest starts mid-January, where the share of searches for the US is down 20 percent from 2016. Then the share drops drastically after the inauguration,” Rengfors explained.

“The interest starts dropping when Trump's politics comes into focus, and then really dives when the executive orders start flying,” he added.

While it is difficult to quantify just how much money that may amount to, Rengfors thinks alarm bells should be going off for the tourism industry in the US.

“I think it's fair to say nobody gains from this situation. Imagine if you had a product, in this case tourism to the US, and you suddenly only had half the order coming in. That would cause panic in most organizations,” he said.

Flygresor’s search engine works in the same way as English language engines like Skyscanner or Kayak. Accounting for 50 percent of all searches made for air tickets in the Swedish market, Flygresor claims to be the biggest source of travel interest data in Sweden.

The last available data for the total number of people travelling from Sweden to the US comes from the US National Travel & Tourism Office, covering the year 2015. During that year, 586,332 trips were made from the Nordic nation to the US.

Flygresor included both return and one way tickets to any destination airport in the US in their analysis.