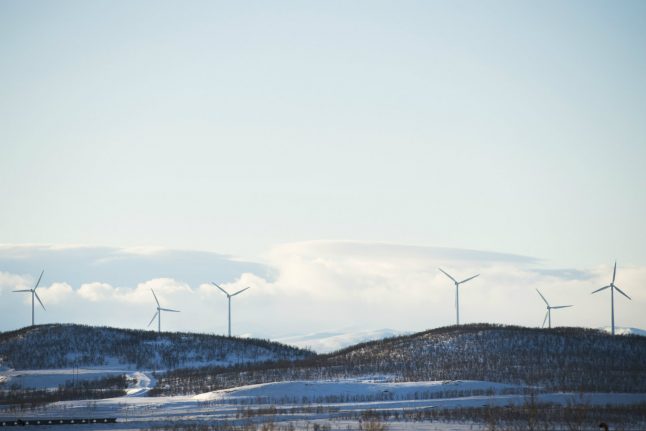 File photo: Fredrik Sandberg/TT
The total power of new turbines built last year amounted to 605 megawatts (MW), a significant reduction compared to outputs of between 700 and 900MW in preceding years.
The slowdown in expansion is not unexpcted according to Sweden's Energy Authority (Energimyndigheten) – the last few years have seen the production of renewable electricity, including wind power, exceed demand.
“We have been setting records for a few years. We also have a lower electricity price than before, which means that there is more competition between suppliers,” Lars Andersson, head of Energimyndigheten's renewable energy department, told news agency TT.
Andersson also said that the development of technology has made it possible to build taller and bigger wind power plants, thereby producing more energy.
This has resulted in an overall drop in profitability.
The Swedish parliament has set an annual target of 30 terawatt-hours (TWh) of energy to be produced by renewable sources by 2020, with a further 18TWh to be added to this by 2030.
Current production by wind farms stands at 16 TWh per year. A further 1,600 units are expected to be required to be built in order to achieve this.
“We are going to achieve the target for 2020, but are unsure regarding 2030,” Charlotte Unger Larson, CEO of Svensk Vindenergi (Swedish Wind Energy) told TT.
Larson said that the reduction in expansion was linked to many companies choosing to invest in Norway or other countries, and that Sweden's closeness to its goal is resulting in a reduction in interest.
Uncertainty also exists within the industry as to how the renewable energy will be paid for. Larson told TT that the current system has resulted in losses for companies that made early investments in the industry.
“The market is in crisis so remuneration is very low. The idea was that the system for payment would contribute to investment costs for new renewable energy, but it has not turned out this way,” Larson said.
The wind power executive hopes that the Swedish government will soon come forward with a new proposal.
“A functional system will ensure that the industry will also reach the 2030 target. Market actors need to have confidence that the system can cope with technical advances so that earlier investors do not lose out and remuneration is fair.”
“We are facing a climate crisis and coal is dominating Europe – we must produce more renewable energy. We cannot solve climate change issues by only thinking in terms of national borders,” Larson said.