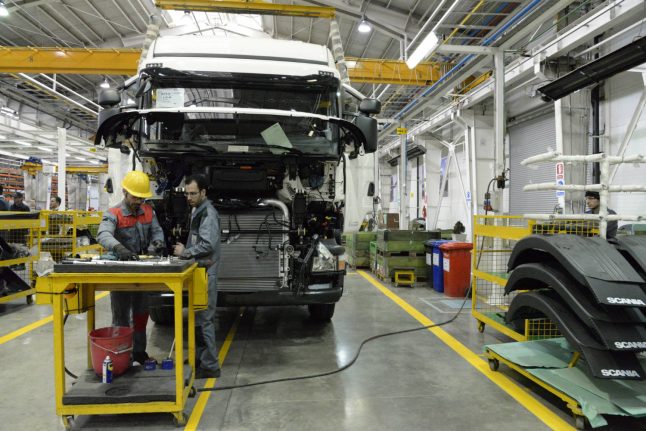 Trucks being assembled at the factory of Scania's local partner near Tehran. Photo: Jenny Pettersson/TT
In an industrial area a few dozen kilometres west of Tehran is the factory where Scania's local partner Mammut assembles parts from Sweden into complete trucks.
It was here that Hasan Kian, who works in quality control, took a break from his work to shake hands with Swedish Prime Minister Stefan Löfven during the latter's unannounced visit to the factory.
Löfven made an official visit to Iran this weekend, where he met with President Hassan Rouhani in Tehran.
Scania, meanwhile, was one of the companies that chose to remain in the country during the period of economic sanctions, which led it having a large part of the Iranian market for trucks and buses.The company's competitors today are mainly Chinese manufacturers.
“It is unusual for us to have such high numbers, but it is connected to the fact that we stood by our customers. We did this while maintaining open books with all relevant authorities and had their approval,” Scania's CEO Henrik Henriksson told news agency TT.
Henriksson visited Iran seven times last year – more than any other country.
But doing business with Iran remains subject to risk, says the CEO.
The remaining US sanctions, those which are not subject to the nuclear agreement, affect financing options. Most banks do not want to risk US fines and are biding their time, reports TT.
“It is no secret that it is difficult to do business. Channels must be opened if the market is really to take off,” said Henriksson.
The Scania boss believes that his firm could double its exports, which are expected to reach 3 billion SEK ($336 million) this year, if financing was made easier.
But Henriksson told TT that he believes Swedish businesses have more to offer Iran than just goods.
“We can contribute with our skills in leadership and education. We want to take part in the effort to improve the environment and road safety in Iran, and hope to receive the support of the the Swedish government for this,” he said.
Ylva Berg, CEO of Business Sweden, told TT that companies moving into 'complicated' markets like Iran take values like employee rights and equality with them into those markets.
“It is a way of exporting values, which I think is interesting,” she said.