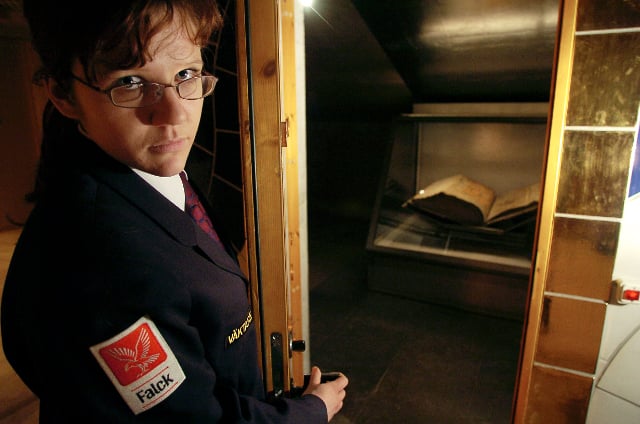 There is a Devil's Bible (The Codex Gigas) in central Stockholm and it’s around 400 years old and the biggest medieval manuscript ever known. The Codex Gigas means literally “the huge book” and it truly deserves its name, the book is 895×490 mm, 620 pages, and weight is whopping 75 kg.

According to a legend, the Devil's Bible was handwritten by an imprisoned monk in Böhmen (current Czechia), who got the devil's help to complete the work in one single night. If that isn't impressive enough, look for the page with a full-colour portrait of the devil himself!

How to get there: Go to Stureplan in Stockholm and look for the National Library of Sweden (Kungliga biblioteket) in the Humlegården park. The Devil's Bible being carried into the National Library at the library's 125th birthday celebrations. Photo: Björn Larsson Ask/SCANPIX

2. A Viking Village in The Middle of Nowhere

In the deep forests of Värmland, there is village known as Nysäter where Värmlands Vikingacenter lies. This village has everything from ships to markets. There is also a huge market every year that gathers Viking fans from across all of Scandinavia called Vikingating. Oh, and did you know there is a supermarket called “Vikingahallen” which means “The Hall of Vikings”?

How to get there: Take the E18 road from Karlstad and you'll reach Nysäter in about 40 minutes or take E45 if you are coming from the south. Check Värmlandstrafik, Swebus or Netbus for bus connections. Sweden's smallest church is only about 1.5 square metres and was built by a former crafts teacher, Rodney Sjöberg, who wanted to have a new project after retirement. His father was a pastor and where Lillkyrkan stands today was a former Mission Covenant church.

Rodney started to build Lillkyrkan in the year 2000 and finished four years later. The church has been blessed by a bishop and is now available for baptisms and weddings. Don’t forget to write in the guestbook before you leave. Enjoy!

How to get there: From Trollhättan take route 62 and drive towards Vårgårda. When you see a sign saying Upphärad turn left and go another 3km, and you'll pass a little bridge. Take a left after the bridge, the church is on a hill just next to the road. Few people can brag about having a miniature city in their garden, Jan-Erik Swennberg is an exception; he made his own Little Istanbul in a little town outside of Sala.

Erik went to Istanbul back in 1979 and all it took was three days before he fell in love with the ancient but lively city. After coming back to Sweden he slowly but surely started to build miniature versions of famous buildings such as the Blue Mosque and Topkapı Palace. No something you would expect in rural Sweden, right?

How to get there: Take Europe Route 18 from Stockholm and drive northwest towards Enköping. From there follow route 70 to Sala. Please note that the miniature city is in a private garden and you have to be respectful.

In Alphems Arboretum you'll get one of the largest collections of trees in Sweden and oddly enough, also Snow White's original house. The story started with a young Swedish man named Gustav Tenggren who visited the arboretum, and after seeing the park owner's house he got inspiration. Later Gustav immigrated to the US just as so many Swedes did in the early 20th century. In America, he got a job at Walt Disney as a cartoonist, where he made use of his inspiration from Alphem. Voila! Snow White's house.

How to get there: From Falköping drive on the road 47 towards Trollhättan, turn towards Floby, and then follow the signs. The entrance fee is 30 kronor and kids under 12 have free admission. There is a great coffee house open during summer time. A museum dedicated to Swedish convenience store chain Pressbyrån doesn’t sound too exciting, right? You might have to rethink, since Pressbyråns museum has a two-year waiting list, is unknown and still somewhat trendy according to the evening papers. Inside the museum, you can find out more about Pressbyrån's over 100-year-old history, read headlines from old newspapers, see old tobacco vending machines and find out how Pressbyrån became the most common Swedish convenience store.

A boy delivering newspapers in the 1950s on behalf of Pressbyrån. Photo: SvD/TT

Vladimir Lenin was not only a Russian revolutionary communist leader but also a frequent spa visitor, and his favorite bath house was in St Petersburg. Unfortunately, in 1918 his government moved to Kremlin in Moscow. Lenin then simultaneously lost his beloved favourite spot in the back left corner of the bathhouse, which would be later known as “The Lenin Baths”. The bath house was a popular spa destination for party officials until the 1990s when it closed down.

Luckily, the founder of Hotell Gästis in Varberg made a visit to St Petersburg back in 1983 and felt so inspired that he decided to recreate the spa at his own hotel. Apparently, he was not allowed to sit on Lenin's favorite left spot while at the original bath house. However, at Lenin's Spa Resort in Varberg, you can sit and relax just like Lenin used to do!

How to get there: Take E6 if you are coming from the south or north, and go to Varberg city centre then look for Hotell Gästis. It’s on Borgmästaregatan. 8. A Buddhist Center in Lapland

On a cliff in the small town Fredrika in Åsele municipality there is an unexpected sight of an 8.5-metre-tall Buddha statue. Behind the Buddha, there is a statue of a monk, named Long Poo Thuad. There are also two elephant statues; they represent peace, beauty and welcoming the guests. Everything started with a monk, Phramaha Boonthin, who was in Lapland in 2004 and was searching for a quiet place to build a temple at. A contact of his told him about Fredrika in Åsele and soon the plans were in motion.

The plan was to build the big temple, but due to its financing solely through donations, things have been going slowly. Still, the statues are magnificent and the place is well worth a visit.

How to get there: Take route 92 to Fredrika town and you can find the Buddhist center at Holmselevägen 68. Not something you would expect to find in northern Sweden. Photo: Gudrun Norstedt/Wikimedia

Swedes love coffee and having fika. Especially among the older generation, the thermos plays a huge role in daily life, ensuring it is possible to bring a hot beverage everywhere. Even though the takeaway trend is huge among the younger generation, Swedes still love to bring their thermos for a picnic, road trip or when going hiking. In other words, going to a Thermos museum in Sweden makes perfect sense. The museum has 100-year-old thermoses and it contains a collection of thermoses from different parts of the world. You'll simply get flasks in all shapes and colours!

How to get there: The town is located in Hudiksvalls municipality and is easily accessible from route 84. Look for a café named “Café 11:an” in central Delsbo and you'll find the museum from there. Which one is your favourite? Photo: Staffan Löwstedt/SvD/TT

There is an old saying that Gotska Sandön was the last island in the Baltic Sea that was occupied by pirates. Today the island is a national park and the most remote island in Sweden. With its gorgeous empty beaches, pine tree forest and a diverse animal life this is a unique destination for the outdoor lover who also enjoys a bit of adventure. Note that it doesn't have any facilities like a hospital or stores so you need to be in OK condition and also bring the food you plan to consume during your stay.

How to get there: You can visit Gotska Sandön between 24/5-10/9 2017. Boats operate regularly from Nynäshamn's harbour and also from Fårösund, Gotland. There are different sleeping arrangements, from renting a cabin to hostels, camping or even renting a tent. Gotska Sandön is a nature reserve and you are only allowed to camp on designated camping sites. To find out more visit: Sandoresor.se Gotska Sandön. Are those pirates or just tourists out for a walk? Photo: Pelle Sten/Flickr