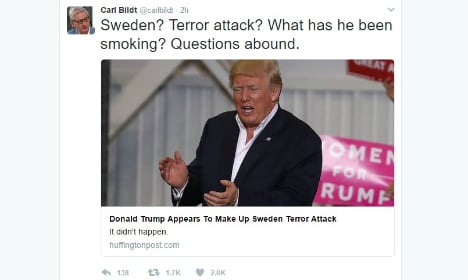 The Swedish twittersphere went nuts on Saturday, with #LastNightInSweden quickly becoming one of the most popular hashtags after Trump appeared to justify the controversial US travel ban targeting seven Muslim countries by claiming some sort of incident had happened in Sweden.

“When you look at what’s happening last night in Sweden – Sweden! Who would believe this? Sweden!,” the American leader told a Florida rally.

Only nothing had happened in Sweden.

Sweden? Terror attack? What has he been smoking? Questions abound. https://t.co/XWgw8Fz7tj

While Sweden’s former prime minister Carl Bildt wondered what Trump might have been smoking, others asked whether he might have referred to a massive meatball theft, someone having opened a tin of fermented herring in public, or the fact that it had snowed overnight.

Someone decided to open up Surströmming in a public place. #LastNightInSweden #DonaldTrump pic.twitter.com/fhRWRarQU4

Others went on to crack jokes about the incident perhaps involving the traumatic experience of trying to assemble IKEA furniture.

The curator of Sweden’s official Twitter account @sweden – an account that is handed over to a regular Swede every week in a show of democracy – was kept busy reassuring people that all was fine in Sweden. In just four hours, more than 800 people had mentioned the @sweden handle, she said.

No. Nothing has happened here in Sweden. There has not ben any terrorist attacks here. At all. The main news right now is about Melfest. ->

Several media outlets speculated Trump might have made the comment after Fox aired an interview with documentary film-maker Ami Horowitz on Friday and who claims Sweden is trying to cover up the problems linked to immigration.

If Trump referred to a supposed terror attack, the president and his entourage have now alleged three non-existent terror attacks since he took office. White House Press Secretary Sean Spicer has, on several occasions, spoken of an attack in Atlanta that never happened, while the president’s senior advisor Kellyanne Conway was mocked after referring to the Bowling Green massacre – which also never occurred.