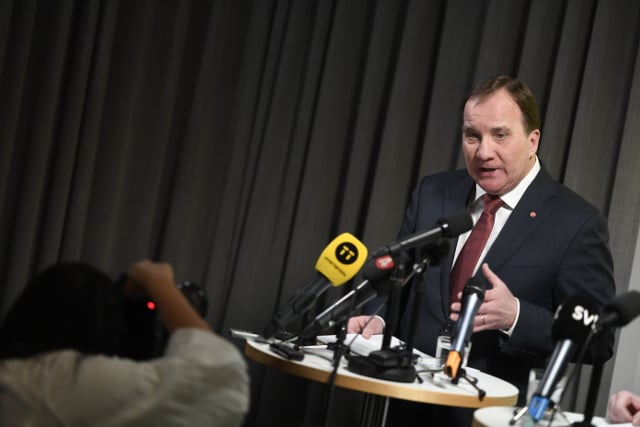 “Jobs that require little or no education will first be filled by the unemployed who are already in our country,” Social Democratic leader Stefan Löfven told reporters in Stockholm.

A country of almost ten million people, Sweden took in 244,000 asylum seekers in 2014 and 2015, the highest number per capita in Europe. Figures have since dropped to fewer than 30,000 in 2016, following tighter borders and asylum rules.

“It's unreasonable for us to have a labour migration that consists of dishwashers (and) restaurant employees when we have capable people who have arrived here as refugees,” Löfven added.

“The first thing we will do is to emphasize that everyone who can work will work,” the 59-year-old leader said as he presented the Social Democrats' programme for its party congress in April when it will lay the foundations for its 2018 election campaign.

Around four percent of people in Sweden aged 15-29 were either unemployed or not attending school in 2016, according to Statistics Sweden.

The country granted work permits to more than 12,000 people from countries outside the EU in 2016.

This figure includes around 4,000 unskilled labourers such as cleaners, chefs, waiters and waitresses and mechanics, according to the Swedish migration board.

The Social Democrats run a minority government with the Green Party, which opposes the plan, making it unlikely for Sweden to restrict labour migration before the September 2018 election.

“If the Greens choose to dig their heels in and fight then there'll be a government crisis,” Jonas Hinnfors, a political science professor at the University of Gothenburg, told AFP.

“It's more likely that this will be a (Social Democratic) election promise instead of forcing the Greens to agree,” he said.

The Social Democrats have traditionally had a large working class voter base, and Löfven's comments were seen as an attempt to win over voters fleeing to the anti-immigration far-right Sweden Democrats.

According to a poll conducted between January 23rd and February 19th by public broadcaster SVT, the Sweden Democrats were the third-largest party behind the Social Democrats and the opposition conservative Moderates.