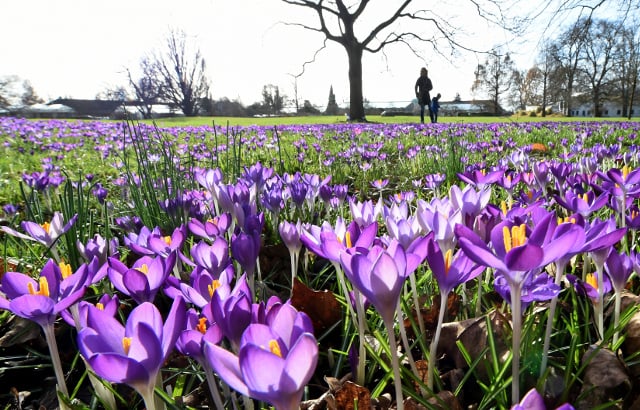 Spring in Germany earlier this month. Hopefully on its way north. Photo: Holger Hollemann/dpa via AP

Just in time for one of the most important days of the year (we are of course talking about waffle day), it looks like the sun is about to come out.

Temperatures will begin to edge upwards on Saturday and are expected to hit double digits in the Götaland and Svealand regions covering southern and central Sweden on Sunday.

“Especially on Sunday it looks like it's going to be really mild air moving up across the country. In Götaland and Svealand it will be just above ten degrees and locally it could be up to 15,” Marie Staerk, meteorologist at Sweden's national weather institute SMHI, told newswire TT.

The northern Norrland region, where spring has not yet arrived, will also get a taste of the warmer temperatures (it is officially spring in Sweden when the average daily temperature stays above freezing seven days in a row).

“It will be somewhere between five and ten degrees, but the wind could make it feel less warm than what the thermometer says,” said Staerk.

But you may want to be careful before you throw a barbecue. SMHI has also issued a grass fire warning for southern and central Sweden, including the Stockholm and Gothenburg regions.

READ ALSO: How to talk to Swedes when the sun comes out