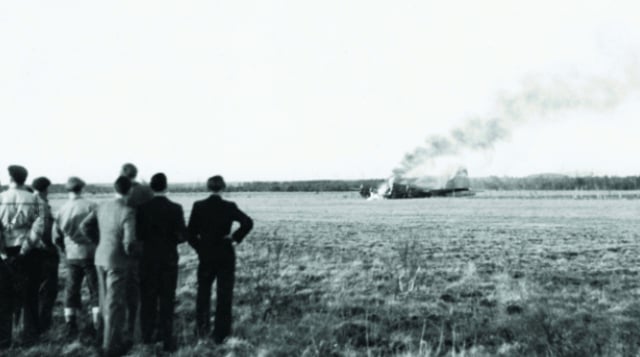 A battle-damaged B-17 after force-landing in a Gotland field. Photo: Pat DiGeorge

“In 1944, as World War II raged in Europe, neutral Sweden was thick with espionage. Representatives of all the combatant nations moved freely throughout the country. The American Legation in Stockholm sat at the center of one of the most important listening posts of the war. The Allies and the Germans openly conducted business in the same locales, wining and dining at adjoining tables in the restaurants and bars of the capital. Information critical to the war effort was being bought and sold, and anyone could be a spy.”

This is the first paragraph of Liberty Lady: A True Story of Love and Espionage in WWII Sweden, my recently published book. Since 2009, I have been researching the wartime activities of my parents, primarily those in Stockholm during 1944 and 1945.

In 2012, I took the first of two fact-finding trips to Sweden. With my son Johnny, we went on a veritable scavenger hunt to find the locales I had uncovered in my extensive WWII research.

Our first stop was the island of Gotland. On March 6, 1944, the day of the Eighth Air Force’s first large-scale daylight raid on Berlin, a battle-damaged B-17 force-landed on a farmer's field near Hemse (main photo). My father, 1st Lt. Herman F. Allen, was the bombardier of the Liberty Lady. All the crew members survived, unharmed. My son and I met with several gentlemen who had actually been on site that day. With their help, we worked to identify the most likely landing spot.

We next went to Falun and then on to Rättvik where the crew was interned with orders not to leave the country. The crew resided at the Hotell Lerdalshöjden in Rättvik, today the Best Western. My son and I stayed there to take photographs and match them up with wartime pictures from my Dad's scrapbook.

In August of 1944, Lt. Allen was recruited by the U.S. espionage agency, the Office of Strategic Services, to befriend a Swedish businessman suspected of selling secrets to the Germans. He and this gentleman travelled together to Uppsala. Nearly 70 years later, my son and I were there too.

We toured the Uppsala University area with Par Henningsson, who has written several articles about the wartime American internees. We were able to find the cannons in front of Uppsala Castle where my father was photographed with John Lönnegren, later tried and sent to prison in one of the biggest spy scandals of the war. Lt. Allen worked from the American Legation in Stockholm located at Strandvägen 7. One of his duties was to manage the many details of the needs of the American airmen who were arriving in Sweden at a brisk pace. He became good friends with Count Folke Bernadotte, nephew to the then King Gustaf V. Bernadotte was chief of the Internment Section of the Swedish General Staff and responsible for all interned airmen who force-landed in his country.

Today, the Esplanade Hotel is in the same complex at Strandvägen 7 that housed both the American Legation and the offices of the German Military Attache. From our accommodation at the Esplanade, it was only a few steps to tour the offices where my parents worked in 1944 and 1945. This inspired a series “then and now” photographs.

The next year, in 2013, I travelled once again to Stockholm with my two sisters and a brother to walk in our parents' footsteps. We visited the historic church, Gustav Adolfs Kyrka, where Count Folke Bernadotte walked our mother, a secretary for the U.S. OSS counterespionage agency, down the aisle to be married to our father, Lt. Allen. The climax of our week was our “Stockholm Pub Crawl” when we visited the same bars our parents frequented. We started with the beer garden at Mosebacke torg, then went on to the Strand Hotel, now the Radisson Blu Strand. We had dinner at KB, Konstnärshuset then ended our evening at the glamorous Berns Salonger. It was an evening none of us will ever forget as we toasted to our parents and their World War II Stockholm friends. Skål!

It took three more years of research and writing before my book was ready. Until now, few books have been published in the English language about two significant topics of World War II history — the American internees in Sweden and the operations of the OSS in Stockholm.

This blog was written by author Pat DiGeorge. You can read her blog here, and Liberty Lady: A True Story of Love and Espionage in WWII Sweden is available through Amazon and Adlibris.