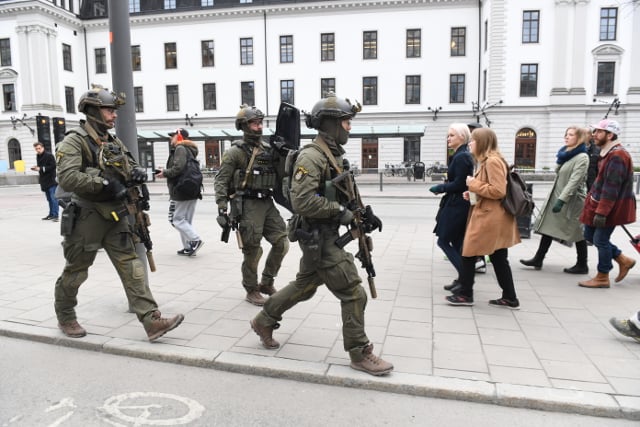 Christoffer Ung was shopping in the Åhléns department store when the stolen truck ploughed through the crowd on a pedestrianized section of Drottninggatan, Stockholm’s busiest shopping street.

“I was on my way to the exit and just saw the wall coming towards us like an avalanche,” he told the TT news agency.

“People turned in panic and fled towards the exits. Then the main thing was to get away from the scene as quickly as possible. My first thought was that a bomb had exploded.”

“When I came out of the building I saw flames emerging from it.”

Faisal Khan, a Swedish citizen originally from Afghanistan, told The Local he was “pretty shaken up” after witnessing the incident at close quarters.

“I was standing just across the road.”

Khan said he believed the driver had intended to continue southbound on Drottninggatan towards the parliament and government buildings, but crashed into a traffic light and appeared to lose control of the vehicle.

“When he hit the traffic light it made a loud noise that made people take notice and get out of the way.”

Khan said the driver had swerved after the truck’s path was partially impeded by a bus at the Mäster Samuelsgatan intersection.

“Luckily he was not a good driver. It felt to me like he did not have experience driving such a large vehicle. This guy really wanted to cause a lot of damage.”

Khan, whose brother, sister-in-law, and their two children were all killed in a terrorist attack three years ago, said he felt huge sympathy with the families of the victims.

“I felt the pain of people running in panic and crying about the same kind of thing I have lived through all my life. Suddenly something happens that changes everything. These poor families will never feel the same again.”

One young man The Local spoke to also said he had witnessed the attack.

“I saw a truck crash into the building, then three people, maybe policemen, trying to break the shop’s front window with sticks. I saw three dead people,” the witness said.

Police later said four people were killed in the attack.

An American man who had just boarded a train for Malmö at the nearby central train station when the attack took place told The Local: “We were told to get off the train, we waited on the platform for about 15 minutes when we saw some people running and shouting ‘shootings, shootings’.”

Police have not confirmed reports that shots were fired after the truck mowed down pedestrians.

READ ALSO: 'Deaths and many injured' in Stockholm truck attack

A Spanish man who had been sitting at a café near Åhléns told The Local:

“We saw people running and screaming. We were told to stay in the café at first. The place got emptied out quickly. There was such a big panic.”

Malin Emtö runs the Esprit store, located on the third floor of a building three blocks from the Åhléns department store.

“I was up in my store and suddenly there was a customer who had a panic attack and started screaming. We ran to the window and saw two dead bodies, badly mangled. The truck that had run them over drove on towards Åhlens City so we suppose it started here,” she told TT.

Emtö said she kept her customers in the store and watched as the street below emptied until only regular police and security police remained.

Another witness left the Centralbadet swimming pool and spa facility on Drottninggatan just after the truck had driven into the crowd.

“It was terrible. Lots of blood on the street and people lying everywhere. Heart-lung rescue was being performed on two people just as I arrived but one of them was likely already dead,” the woman told TT.

Ambulances, police cars and fire engines converged on the intersection where an unknown driver slammed a truck into the crowd before crashing into the Åhléns store.

Police ordered people to leave the scene of the attack and established a large cordon in the city centre area.

“There were police with weapons drawn at the Sveavägen subway exit. They seemed to be hunting for someone,” said the same witness.

One woman who lives in the area told The Local: “It makes me so mad that they would attack my street, kill my neighbours. Three people died and they have fathers and mothers and that makes me angry.”