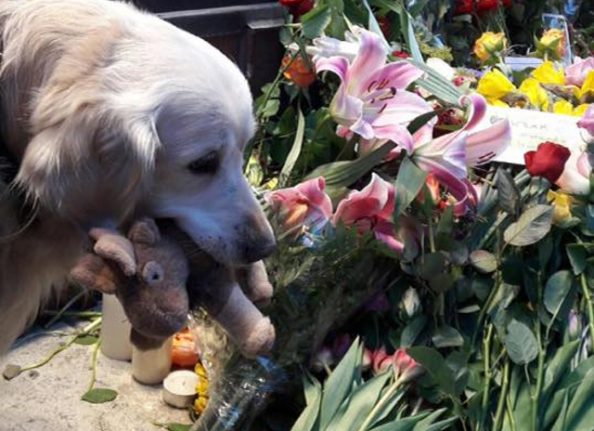 Oliver the therapy dog placing a stuffed toy at the memorial spot for Iggy, the dog killed in the April 7th attack in Stockholm. Photo: Maria Ohlsson

Along with four people, rescue dog Iggy was also killed in the attack, and Stockholmers have made sure to pay their respects to the animal too, leaving flowers, candles and dog treats in tribute in the centre of the city.

But perhaps the most moving Iggy tribute of all came from another animal. Värmdö resident Maria Ohlsson's image of her golden retriever Oliver placing a stuffed toy at the memorial spot for the dog has touched hearts since it started to spread on Tuesday.

Oliver is a therapy dog and for more than five years has been working with people who are ill or grieving. His owner describes him as a particularly intelligent animal.

“Our Oliver was really touched by the situation. It was a poignant moment. Even he felt like something wasn't quite right,” Ohlsson told The Local, describing the moment Oliver took the toy out of her bag and rested it carefully on the pile of flowers.

READ ALSO: The latest updates on the Stockholm truck attack

A huge number of floral tributes in memory of the victims of the April 7th attack have been left at both the Sergels Torg square and on Drottninggatan since Friday. An official memorial ceremony attended by Prime Minister Stefan Löfven and the Swedish Royal Family was held on Monday at Stockholm City Hall.