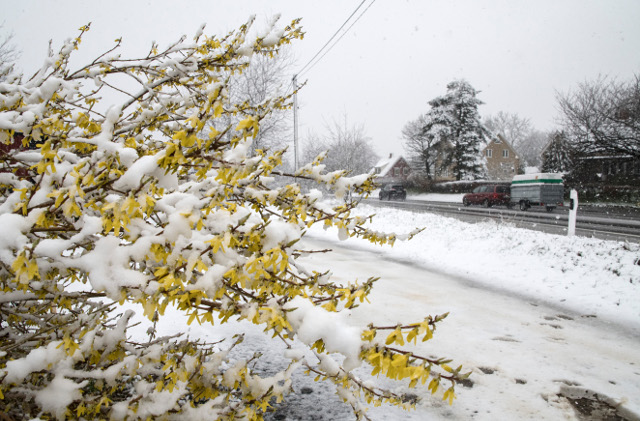 This is an Easter 2017 pic from southern Sweden! Photos: TT

Easter Sunday saw temperatures plummet to around a teeth-chattering -20C in the far northern Norrland.

And the Mercury is still misbehaving in the far south too.
In the capital, Stockholm, Monday will see a high of 2C (and a low of -2C), with temperatures to sink as low as -4C on Tuesday and Wednesday.
Gothenburg will be similarly cold this week, reaching lows of -2C, and even Malmo in the south will hit subzero temperatures on Wednesday.
“A cold front is going to keep pushing through the country this week, and will even hang around at the beginning of next week,” Lovisa Andersson, meteorologist at Swedish weather agency SMHI, told the TT news agency.
Southern reaches of Sweden can expect some light relief on Thursday and Friday, with temperatures expected to hit up to around 10C, she added. Happy Easter from northern Sweden's Skellefteå
The long weekend, for the most part, has been a chilly one. Southern Sweden saw unseasonably cold temperatures, with up to 10cm of snow in northern Skåne, Blekinge, Kronoberg, Halland and Kalmar.
In Örebro, the mercury dropped to -14C, making it the coldest April night since 1944, according to P4 Örebro.
In Karlstad, SMHI said temperatures reached -9C, meaning it was the coldest night of April since 1985.
In Floda, Södermanland, things were even colder, reaching -17C. That was the coldest night measured since the local weather monitoring station was set up in 1995.
“It's over 20 years old now, so we can say it's remarkable that it was so cold,” Alexandra Ohlsson, a meteorologist at SMHI, told Swedish newswire TT.
It's possible for temperatures to fall below -10C in southern Sweden during spring nights, but it's unusual.
In Götaland, since the start of the 2000s, the mercury has only slipped below the -10C mark four times.