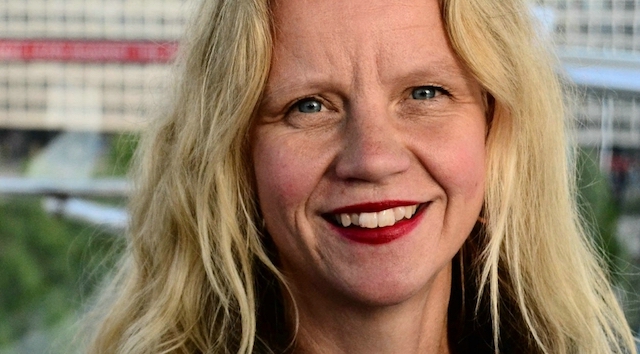 Could you firstly talk a bit about the party’s founding and how it came into being?

The foundation took place around 23rd April 1889, with very close cooperation with the big trade union movement. The most important demand was that there was an equal right to vote. It was revolutionary in a way. In 1917, the Social Democratic party was in government for the first time – exactly 100 years ago! It was an important time as we were in a coalition with the Liberal party. 15 years later, 1932 was a big victory for the Social Democrats – it was when our party began to lead.

Freedom, equality and solidarity were our 3 pillars then and they remain the same now.

The beginning of our party came from a need to react on inequality.

What differentiates the Social Democrats from other parties?

One important thing is that we’re not just a political party – We’re also a popular movement and we work with trade unions and the civil sector.

Man or woman, old or young – they love Sweden and the Swedish model. They care about its welfare, good healthcare, schooling, and they are pragmatic. They are concerned about each other; they want people to succeed and succeed with people.

We need a strong society in order to take care of problems!

What would you say are your core values?

What would you consider is your most important policy/value?

The Swedish model and Nordic model are very very important. Our cooperation with the trade unions, the strong local self government combined with the good organisation of the party. It is important to be in opposition to all the inequalities we all face. It is also good to keep the internal debate, which is why are going to congress. The challenges are big and difficult but we will discuss solutions in congress. The Social Democratic party is the original party for the Swedish model.

As the deputy general secretary, it is my job to be a link between the local and national government. It is my job to ensure national politics is a reality at a local level. The municipalities often develop new politics and it is important to put up those good examples on a national level.

The Swedish economy is currently pretty good, unemployment is going down, employment increasing – but we must focus on creating more jobs for continued growth. We then must share the growth with the people. Also social cohesion is too weak right now. We also will put more resources into education as this is important for welfare. We also must fight against segregation.

The PM is expected to take more hardline policies for the election – cracking down on crime, toughening up border controls and increasing defence spending.  Could you talk more about that?

We undoubtedly have great challenges in the future, but it is important to have a clear priority on jobs and education.

The current poles show the Social Democrats to be behind the Centre Party. Are you doing anything in particular to ensure you don’t lose support?

Not true! They are the fourth biggest party in the polls.

In which case, what are you doing in order to maintain/gain support?

This is why congress is so important. There we will formulate and create a new politics for the coming year. All 350 delegates campaign and travel around the 390 municipalities to talk about what happened at congress and what we want to do. We also knock on a lot of doors! We also hope to bring more money to important issues i.e. welfare, schools and police.

How/ in what ways has the current global political climate influenced policy making?

It is important to take everything into account when making policy. Democracies are never built in a day. The Prime Minister has been travelling a lot, campaigning, so we can develop the Swedish model.

Yes – at a national level there is the party congress and we meet every four years. There are 350 delegates, those delegates are nominated by the party district and there are 26 party regional districts. They are responsible for county policy and they also nominate MPs for the county council and parliamentary elections. The 290 municipalities – they have quite a lot of power and play important role. They are able to independently tax citizens/residents which is then used to fund schools and so on. The Social Democrats have a local level in all 290 municipalities.

The audience reading this consists of international students here in Sweden on scholarships from the Swedish Institute. If they should remember one thing about the Social Democrats when they return home, what should it be?

That the Social Democrats created the Swedish model and will continue to develop it in the future with freedom, equality and solidarity as the 3 pillars.