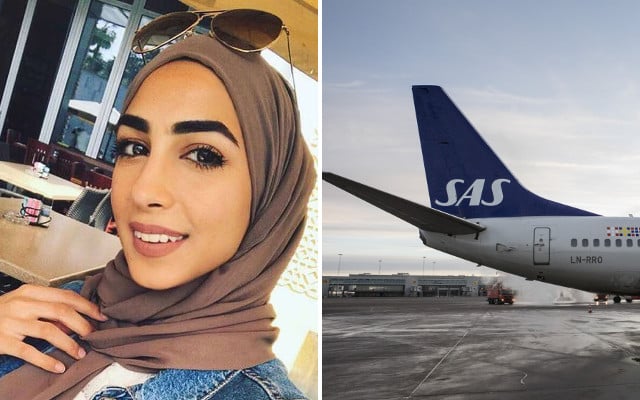 Aye Alhassani (left) was informed about the policy at an interview or a job with SAS. Photo: Aye Alhassani & Christine Olsson/TT

Aye Alhassani, 23, had completed several tests and a group interview before she was invited to an individual interview for the position with the airline. It was during the interview that she was informed SAS has a uniform policy banning the wearing of religious symbols.

“At first they were cautious and I don't think the interviewer wanted to be straight about it. But eventually it was clarified that it's not permitted to wear a headscarf according to their policy. I was quite shocked,” Alhassani told The Local.

The 23-year-old asked why they had chosen to wait until her individual interview to inform her about the rule.

“It would've been better to get that information early in the process, because I could've then looked for other jobs and not prioritized the SAS job over others and let them go. There are many things you have to think about as a company when you're recruiting. The interviewer clarified to me they wanted to give me a choice in person to take off the headscarf for the job. Which annoyed me.”

In a comment, SAS Sweden's head of media Fredrik Henriksson explained the company has a policy that “applies to all of our employees regardless of religion, culture or ideology”.

“SAS' uniform follows a neutral, unified visual identity and does not contain any other garments, accessories or political, religious, cultural or ideological symbols.”

READ ALSO: Swedish woman denied job because of her headscarf

The company also referred to a recent European Court of Justice ruling that concluded businesses can stop staff from wearing visible religious symbols, provided it is part of a general policy barring all religious and political symbols.

The March 14th ruling from Europe's highest court concluded that banning the wearing of such symbols does not necessarily constitute direct discrimination as long as all employees are asked to dress neutrally and as such the rule does not mean “persons adhering to a particular religion or belief being put at a particular disadvantage”.

Alhassani said she hopes Swedish companies opt not to use the EU ruling as justification for stopping employees from wearing religious garments however.

“I want the EU ruling not to impact Sweden's rules. It's such a shame that when you have a choice you opt to follow this kind of thing, that's above all what I want to say.”