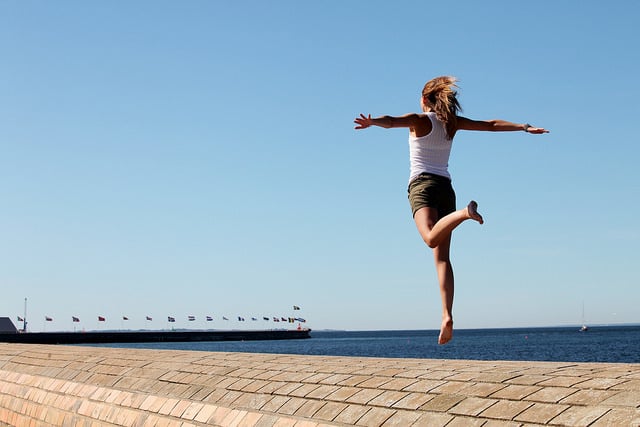 The jovial bus driver punctuates the statement with a hearty laugh as she accepts payment from the lanky man who just told her he’s not in a hurry. He – a Stockholmer – responds with a chuckle of his own, and they proceed to banter like old friends.

Of course he’s not in a hurry. This is Helsingborg.

It’s Thursday morning, but it could just as easily be Saturday – or a Monday for that matter. In Helsingborg there’s a special mentality…in a way, you could say it’s always the weekend.

Some locals pass by on Segways as though it’s the most natural thing in the world, and a young couple stops to smell the flowers lining the street. It was raining in Stockholm, but here the sun is shining – the people of Helsingborg like to point out that spring arrives earlier here. Indeed, it’s one of Sweden’s top summer towns, and one of Sweden’s most beautiful cities, too – even the trash cans on the street sit on their own little squares of red carpet. The Local took a quick trip to find out why so many Swedes love to escape to Helsingborg. There are innumerable ways to spend a great few days here, weekend or no – and you get a lot more bang for your buck than you do trying to squish in a quick trip to, say, Berlin or London.

Here’s what we discovered! If there’s one word that sums up the happy-go-lucky Helsingborg mentality, it’s tura.

It’s a verb, and a favourite activity of locals and visitors alike. What does it mean? Simply to take a boat ride from Helsingborg across the channel to Helsingør in Denmark (that’s where Hamlet took place, literature buffs). And then back again. And the other way. And back. And forth.

Indeed, the locals told us that hanging out on one of these ferries is one of the most relaxing ways to spend any day. You don't have to get off; you can just stay onboard and have dinner at the Waves Restaurant or fika at Cafe Ristretto. Would you rather lounge on deck and devour shrimp sandwiches and locally-brewed beer? That works too.

Yes, we said locally-brewed beer. It turns out Helsingborg has a couple of bountiful (micro)breweries! Helsingborgs Bryggeri is celebrating six years this May and is more popular than ever.

Brewski, while a bit younger, is no less impressive – this August they’re hosting their second annual Brewskival festival, which sold 500 tickets in three minutes. Over 60 breweries from around the world will be in Helsingborg for the event – don’t miss it.

Beer's not your cup of metaphorical tea? Helsingborg is also home to a handful of vineyards! While we’re talking about delicious indulgences, we might as well bring up the chocolate. Chocolate shop Chocolatte has won multiple prizes at the International Chocolate Awards for their mouth-watering confections, with unique flavours like virgin mojito, roasted canola and sea salt, and salt caramel.

Zoégas, one of Sweden's largest coffee brands, is also from Helsingborg. The brand has been producing Sweden's favourite dark-roast for over 130 years. You can even go visit a Zoégas shop from about 1900, still in use! Perhaps when you think of Sweden, beach isn’t one of the first words that pops into your mind…but a weekend in Helsingborg might change that!

Helsingborg is a coastal city and the sea is never far from view. There are several open-air baths and saunas – but the highlight, of course, is the beaches. Natural sand beaches in Helsingborg include Råbocka, Havsbaden, and Fria Bad – but best of all is Tropical Beach, located in the city centre. Each summer the city plants palms in the sand, and the party begins!

Find out more about a weekend in Helsingborg It’s been said that Helsingborg is Sweden’s friendliest city. There are a few reasons for that.

Not only are the people of Helsingborg more relaxed than big-city dwellers or northerners buried in the snow – Helsingborg was also Sweden’s second city to join the Greeters programme.

Helsingborg Greeters are local residents who are eager to share their city with visitors – for free, of course.

You can book a meeting with a Greeter before you arrive, and get a unique local perspective of the city. Maybe you'll fika or go for a walk…either way, you’re bound to have fun and get some great tips for the rest of your trip! Ah, food. How would a weekend retreat be complete without indulging in new treats?

Helsingborg is brimming with top-notch restaurants for all palates and price levels. Gastro, Drottninggatan 35, and Sillen & Makrillen are just a few favourites that appeal to the fine-diner.

Via 95 and Barefoot Beach House are waterside havens for vegetarians and fish lovers. On a budget? No problem. Chances are you will enjoy Koppi (also famous for its coffee!), Holy Greens, or the adorably retro Ebbas Fik, complete with 1950s gas pump and juke box.

Adventure lovers and romantics alike flock to Helsingborg to get some fresh air. In addition to the 25 kilometres of beach along the coastline, Helsingborg has hiking and biking trails galore, and plenty of spots for picnics. Mölle, a town along the bike path Kattgattleden from Helsignborg to Gothenburg. Photo: Lena Evertsson/Familjen Helsingborg.

Did you know you can surf in Sweden? Yeah…in Helsingborg you can, and should. The Vikingstrand (Viking Beach) surf club has been open since 1984. Kite surfing, wind surfing, and kayaking are also popular.

Sofiero is one of the city’s most popular attractions, famous for its 10,000 rhododendron flowers that bloom each May and June. The park also hosts concerts during the summer months – Norah Jones and Bryan Ferry are just a few of the names on the list this season!

The medieval Old Town area is full of quirky little boutiques, and Kullagatan also offers a wide range of unique shops you won’t find anywhere else.

Helsingborg is also home to famous Swedish brands Stenström – for elegant fashion – and Höganäs, for classic Swedish stoneware and ceramics. Helsingborg is also a perfect place to set free your inner child…or your actual child for that matter.

Helsingborg doesn’t take itself too seriously and is ready to have fun – as exemplified through the new Museum of Failures.

The Tropikariet indoor zoo is a favourite among kids from 6 to 86.

Of course, every Swede knows the best place for kids to be is outside – for instance on the pirate-themed playground, complete with a ship, at Gröningen park, or at the Fredriksdal Open-Air Museum and Botanical Gardens.

Finally, don’t forget to head up to Kärnan, one of the oldest buildings in the city. (It also offers one of the best views of the city, in our opinion.) Not only will you get a great history lesson, but you can try clothes and play board games from the Middle Ages – we won’t judge!

Time for a getaway? Find out more about Helsingborg

This article was produced by The Local Client Studio and sponsored by Visit Helsingborg.