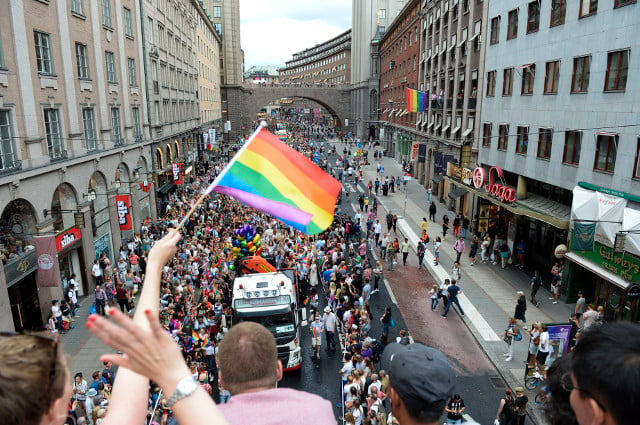 Every year, campaign group ILGA-Europe releases its Rainbow Index and Rainbow Europe Map detailing the legal and policy human rights situation of lesbian, gay, bisexual, trans and intersex (LGBTI) people across Europe. And while Sweden was once considered to be the top country in Scandinavia and the fourth best in Europe, it fell to 12th position in 2016, and has failed to improve this year.

“Sweden has remained in the upper 'green' section of our Rainbow Europe Map for several years. Of course that's a positive thing, but other countries have bypassed them on the ranking by introducing more comprehensive, inclusive laws and policies,” Emma Cassidy from ILGA-Europe told The Local. The percentages correspond to the legal and policy human rights situation for LGBTI people, with 100 percent being full equality. Photo: ILGA-Europe

The index highlights a “gap within Sweden's legal framework, as it currently does not mention gender identity or sex characteristics within its hate crime or speech laws”.

In order to improve the legal and policy situation of LGBTI people, ILGA-Europe recommends that Sweden should update its existing framework for legal gender recognition to ensure the process is based “on self-determination and is free from abusive requirements”.

At present, Swedish law states that transgender people must go through a medical procedure before they can have their gender change legally recognized. In March, the Swedish government announced that it wants to do away with that law and have the legal and medical aspects of changing gender separated, but the changes are not expected to be brought to the Riksdag until the spring of 2018.

READ ALSO: Why some parents in Sweden are having to adopt their own kids

The 2017 Rainbow Index also suggests Sweden should prohibit medical intervention on intersex minors when “the intervention has no medical necessity and can be avoided”, and that it “introduce and implement laws and policies on asylum that guarantee effective protection on all SOGISC (sexual orientation, gender identity, sex characteristics) grounds”.

“There are a lot of points in the equality/family sections, but very little indeed in terms of protection for trans and intersex people against hate crime and hate speech, or asylum laws, and policies,” Cassidy observed.

“There are still problematic barriers for trans people in the legal gender recognition section of the map, at a time when other European countries have opted for a self-determination model. So there really is still room for Sweden to be even more proactive and advance its legal protection despite its position in the top half of the Rainbow Europe ranking. Lots done but lots more to do.”

For the second year in a row Malta topped the Rainbow Europe ranking, followed by Norway in second place, with the Nordic nation leaping up by nine places due to the introduction of self-determination in its gender recognition law. The UK is third.

ILGA-Europe thinks that while progress on LGBTI equality still exists in Europe overall, it is slowing down and at risk, and is not taking place at the speed or spread needed to achieve real equality.

The campaign group also asks for more “political backbone” from leaders in order to combat a roll back in rights and further progress, with countries traditionally viewed as equality champions generally not breaking boundaries in the way they used to.