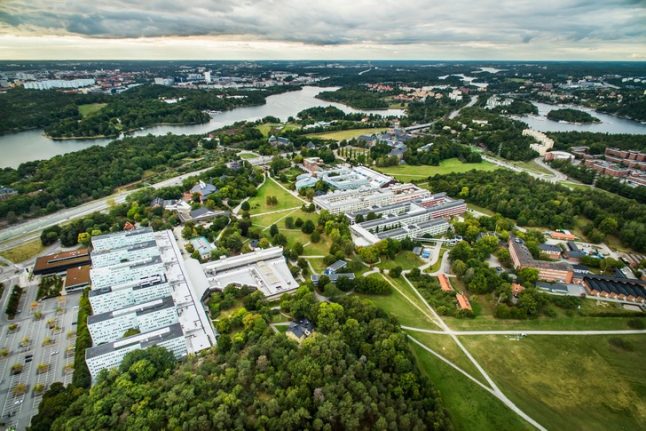 And that’s not opinion – it’s fact.  In today’s world facts – and the science which provides them – are essential.

Swedish companies are also among the most sustainable, and the Swedish capital consistently tops sustainability rankings.

And since it’s Stockholm Earth Week, we thought we’d celebrate by pointing out eight ways Stockholm University is providing the world with knowledge and science on the state of the earth and our impact on the environment– thus paving the way for a more sustainable future through science. A joint initiative between Stockholm University and the Beijer Institute of Ecological Economics, the centre looks at how we humans influence the planet we are living on.

It also explains why we have to stop considering nature and the environment as something separate from our daily lives. Through ground-breaking research the Stockholm Resilience Centre helps shape strategies and policies that can reduce our impact and increase the well-being of both people and the planet – because if we don’t look after the planet, it won’t look after us!

The Stockholm Resilience Centre is a lot more than research. It’s also about action, and recommendations that can actually make an impact.

That’s why Centre Director Johan Rockström, a global leader on environmental science, with his team of researchers, recently came up with a solution that will actively reduce carbon emissions.

It's sort of an inverse of Moore's Law – which predicted that computer processors would double in capacity each year. But Rockström’s ‘Carbon Law’ explains how we can halve carbon emissions each year – meaning emissions would reach zero by about 2050 and thus meet goals laid out in the UN Paris Agreement. (The next step is to get the world’s politicians onboard…)

3. The Bolin Centre for Climate Research

It’s named in honour of Professor Bert Bolin, an influential Swedish meteorologist who was a founding member of the Intergovernmental Panel on Climate Change (IPCC). In case you didn’t know, the IPCC’s work led to UN climate change treaties, and was later awarded a Nobel Prize.

With thousands of contributing scientists spread across the world – not to mention 300 on site in Stockholm – The Bolin Centre is a force when it comes to gaining and spreading knowledge about manmade climate change through inter and multi-disciplinary research.


What does this kitty have to do with Stockholm sustainability research? Read on… Photo: Jana Weiss

Our world is full of chemicals, and new chemicals are being produced every day – but just how safe are new chemicals for the environment? This is where SweTox comes in.

The Swedish government aims to have a non-toxic environment by 2020, so SweTox, a collaboration between eleven Swedish universities, works towards assessing chemicals and their influence on the environment.

Admittedly, ‘materials chemistry’ isn’t something most of us think about regularly – but it should be, as the results can have a major impact on our daily lives. For instance, how can the materials in our clothes and tools around us, such as hand blenders, affect us? And a recent study from SweTox showed that high levels of chemicals can be found in indoor cats due to their close contact with dust.

Materials chemistry research is about creating new materials with unique properties – say, for instance, materials that are magnetic or can withstand high temperatures, or nano-particles that can act as vehicles to carry a medicine to a specific part of the body.

5. The Science for Life Laboratory (SciLifeLab) Research at the Science for Life Laboratory focuses on health and environmental sciences with roughly 4,000 projects on the go, all using the most up to date technology, studying living organisms and how they are affected and affect our lives.

Stockholm University collaborates with Uppsala University, Karolinska Institutet, and KTH at SciLifeLab, but the lab is a resource for all of Sweden, providing state of the art scientific laboratories for top researchers from around the world.

And the range of research projects at SciLifeLab is amazing. Everything from sexism in the Bronze Age, to DNA sequencing, to how some chickens got striped feathers, to why herring reproduce when they do. Name of a Star Wars droid? Nope. Even cooler.

SWERUS-C3 is a multi-disciplinary research programme investigating the link between climate, cryosphere (any part of the Earth’s surface which is frozen), carbon releases from sediment, and any greenhouse gases in the atmosphere.

So what does that mean in practice? Well, in 2014, researchers from universities in Stockholm, Russia and the United States embarked on an expedition to the East Siberian Shelf in the Arctic Ocean. The data collected from the expedition continues to be used to publish new studies – sometimes with shocking predictions!

One of the most recent studies shows that ‘sleeping giants’ in the form of carbon reservoirs could be woken by global warming (they sit within the ice), and their awakening could accelerate global warming…a potential climate catastrophe we’d all rather avoid! Knowledge is power, people. Stockholm University’s research has a great impact on environmental knowledge, and contributes to the development of public policy and political decision making.

Several researchers participate in perhaps the most prominent scientific committees of the world: the Nobel Prize Committees for Chemistry and Physics, which elect the winners each year. Professor Sara Danius is the Permanent Secretary of the Swedish Academy who elects the Nobel Prize Winner in Literature.

And each year the Nobel Lectures in Physics and Chemistry and the Laureates in Economic Sciences take place at Stockholm University’s Aula Magna. Alright, enough about research. How can Stockholm University’s expertise with sustainability affect you?

If you want to learn more about the environment, human impact and earth sciences, and how to make the world a better place even in a small way – there is no shortage of programmes on offer at Stockholm University. Like Marine Biology, Genetic and Molecular Plant Science, Environmental Chemistry, Urban Planning, Landscape Ecology, Environmental Social Science, Social-Ecological Resilience for Sustainable Development…you get the idea.

At Stockholm University, research and education are closely linked, and the top researchers in any given field will be your professors.

So what are you waiting for?

Find out more about studying (or researching!) at Stockholm University here.

This article was produced by The Local Client Studio and sponsored by Stockholm University.