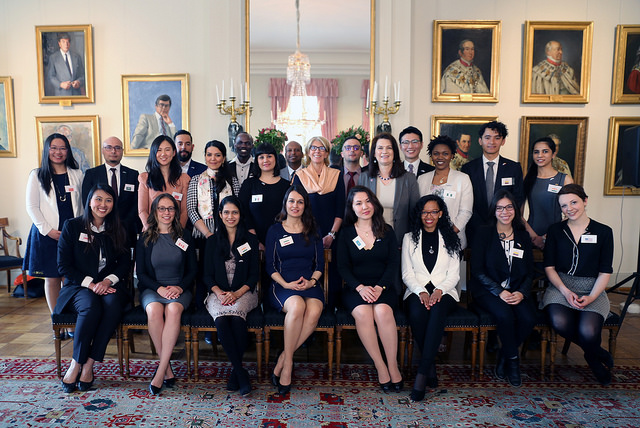 Global Swede is a joint initiative between the Swedish institute and Ministry of Foreign Affairs, and is currently in its seventh year.

In a way, it recognises that in order to overcome global challenges, global partnerships are required, especially as people increasingly cross national borders.

It’s also part of the government initiative to build long-term relationships with international students, and helps SI keep in touch with the students and support them in their future endeavours.

This year, 21 students were presented with the award at a ceremony, complete with a classical music performance, which took place on Thursday at the Swedish Ministry for Foreign Affairs. Students were awarded by Ann Linde, Sweden’s Minister of EU Affairs and Trade. The students are all masters students who’ve considered to have excelled at their respective Swedish Universities in areas related to innovation and entrepreneurship.

Among the recipients this year – just to name a few and give examples of their accomplishments – were Kirsten Teo-Delalay from Singapore, student of International Commercial Arbitration at Stockholm University, and Rajeshwari Yogi, student of Wireless Communications at Lund University.

Kristen, who comes from Singapore, was awarded for being not only the best student in her class, but being incredibly engaging, enthusiastic, and community minded – which of course is especially important for a Global Swede. Kristen was also praised for her ability to interest with people from diverse backgrounds.

Rajeshwari, who comes from India, was nominated for the award by Viktor Öwall, the Dean of the Faculty of Engineering at Lund University. He described her as one of the best students of the programme, which the university itself acknowledged when they awarded her with Lund University Global Scholarship after her first year, when her grades far exceeded those of other students.

Seoljong Kim from South Korea, too was a recipient of the award. The Plant and Forest Biotechnology student at Umeå University, who has been praised for his inquisitive nature, enthusiasm and drive. He completed his thesis on the wildly unusual topic of edible orchids in Zambia, having discovered the topic himself.

A student from Stockholm School of Economics, Miranda Restorick, hailing from Canada, also received the award. She is currently enrolled in the MBA Executive Programme but also spends her time working at ÅF, an engineering and consulting company. Like her fellow participants, Miranda was praised for her enthusiasm, dedication to her programme and exceptional grades.

It can be said that all Global Swedes share certain characteristics – enthusiasm, interest, and exceptional academic performance. The initiative has served well in building international relationships and supporting the future global leaders, while the Global Swedes have been an asset to Sweden and themselves have strengthened the relationships between their home countries and Sweden.