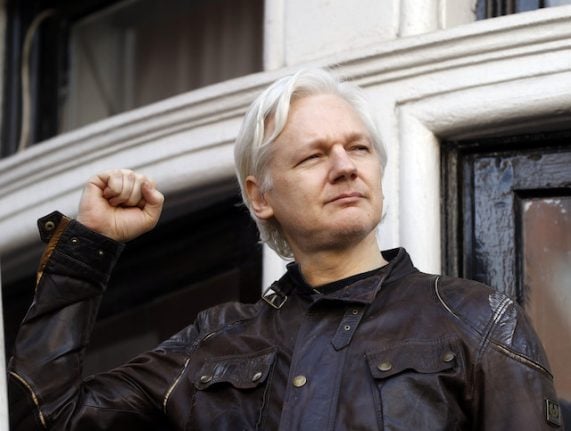 Julian Assange greets supporters outside the Ecuadorean embassy in London on Friday, May 19th. Photo: Frank Augstein/AP/TT
“Ecuador fulfilled its duty, we gave him sovereign asylum, and finally the Swedish judicial system has closed the file and will not press charges against Assange,” Correa said in a weekly report on his presidential activities.
On Friday, Swedish authorities closed the seven-year-old rape case against Assange and withdrew the European arrest warrant issued against him.
British police, however, have said they still intend to arrest Assange if he leaves the Ecuadoran Embassy in London where he has been holed up. He violated the terms of his probation in Britain in 2012 when he took refuge in the diplomatic mission.
READ ALSO: WikiLeaks: 'Embassy stay risks Assange's mental health'
Sweden has made clear that its decision to drop its inquiry did not imply that Assange was innocent, but simply that it saw no realistic way to pursue the matter.
Correa said Ecuador had granted asylum to the Australian “because there were no guarantees of due process (in the US), because there were sectors of the United States that even threatened Julian Assange with the death penalty.”
The WikiLeaks founder has always proclaimed his innocence of the charges and claimed that his extradition to Sweden would have led to his transfer to the United States, where he could be tried for publishing a huge store of confidential military and diplomatic documents.
READ ALSO: Timeline: The key points in the Julian Assange case
“We never wanted to obstruct” Swedish justice, said Correa, noting that Ecuador had allowed a Swedish prosecutor to question the 45-year-old Australian at the embassy, where he remains for now.
Upon learning of the Swedish decision on Friday to close the rape case, Ecuadoran Foreign Minister Guillaume Long urged Britain to grant Assange a safe-conduct pass so he can leave without risk.
Given the recent statement by US Attorney General Jeff Sessions that Assange's arrest is a priority for the Trump administration, authorities in Quito have reiterated the validity of Assange's asylum.
READ ALSO: Lawyer fumes at 'scandalous' decision to drop Assange rape probe