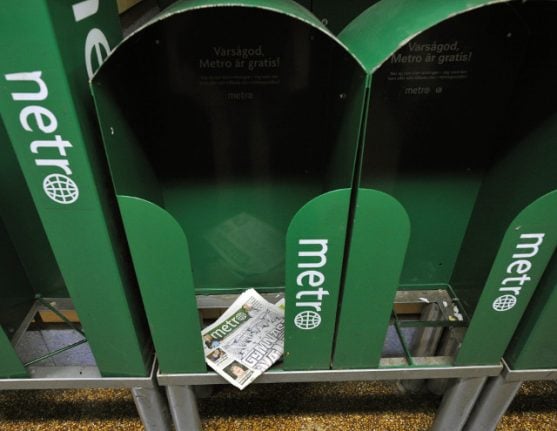 Until recently Mats Qviberg owned 40 percent of investment firm Custos, which bought Metro Sweden for 50 million kronor ($5.7 million) in February after also purchasing a stake in business site Realtid at the end of 2016.

But he has now sold his entire stake in the investment firm for only one krona to Metro's chairman of the board and Custos CEO Christen Ager-Hanssen.

Qviberg's end of the Metro purchase amounted to 20 million krona ($2.28 million), while the shares in Realtid cost him 1.6 million ($183,000). When added to the 50 million krona ($5.7 million) shareolder's contribution he made in order to “ensure that Metro can continue on its chosen path,” the Swede has made a total loss of 71.6 million kronor ($8.19 million) on the investment.

Despite that, he told newspaper Svenska Dagbladet (SvD) that he is “very satisfied with the deal even if it was very short and expensive”.

The sale comes at a time where Qviberg has been making headlines in Sweden for a controversial interview he gave to right-wing populist site Nyheter Idag, where he labelled a Metro journalist as a “typical Stalinist we need to get rid of”.

The interview led to columnists resigning and Swedish broadcaster TV4 ending a partnership with the newspaper, as well as doubts over the future of Metro's distribution on Stockholm’s public transport.

Ager-Hanssen explained to Dagens Nyheter (DN) that he gave Qviberg the ultimatum of either leaving or solving the issues caused by the interview.

“I think he accepted his responsibility. He solved a Gordian Knot with an Alexandrian cut. There was no other path after the way he has acted,” the new Metro owner told DN.

Qviberg insisted that he does not regret his brief period as a media owner, but did admit that he underestimated how much time it would consume.

The businessman is a former partner in the failed Swedish bank HQ Bank, which went into liquidation in 2010.