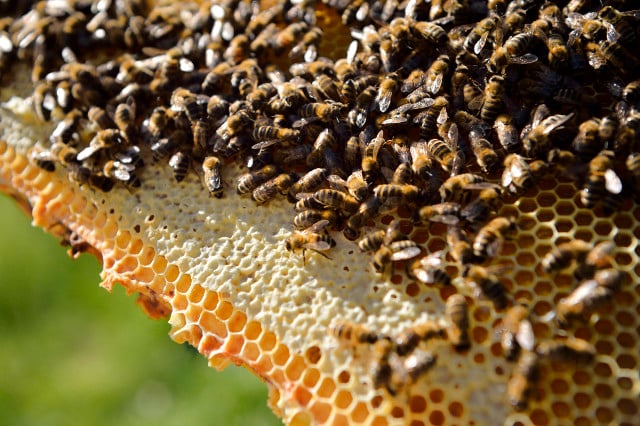 A file photo of bees in Sweden. Photo: Henrik Montgomery/TT

The Diplomatstaden Loves Bees project, which involves the Diplomatstaden neighbourhood where many of the city's embassies are located, the Bin I Stan (Bees in Town) initiative, businesses and municipal stakeholders, aims to establish Stockholm's first bee park in Djurgården and the Royal National City Park (Kungliga nationalstadsparken).

According to the Swedish Beekeeping Association, 76 percent of everything grown in Europe requires pollination, yet 30 percent of native species of wild bees in Sweden are threatened with extinction. Climate change and biodiversity degradation are factors threatening the insects.

Cities are often a better habitat for bees as they lack the use of pesticides found in the countryside. But there is no specific urban biodiversity policy for bees in Stockholm, nor networks of pollinator sites like ones already created in London and Oslo for example.

It is hoped that by establishing a policy for the Royal National City Park, the initiative can spark broader policy in the future.

“Bee friendly zones are places where you can find bee forage and water for all different kinds of bees and pollinators from the spring through to the autumn. It is an area where you assess your impact on pollinators and consciously think about how you manage your land in order to make it more suitable habitat for pollinators and bees in particular,” Sharon Cairns, one of the project leaders told The Local.

“A bee friendly zone should be a model of good practice and create conservation that can be replicated across other parts of the country, and that makes good business and environmental sense,” she added.

The project has found that people are generally concerned about the issues facing bees in Sweden and are keen to learn about how they can help. One step taken to further knowledge is by commissioning an architect to design a show hive in Djurgården, which can become a means of educating visitors to the popular park.

It is hoped that further hives will follow, and that bee friendly practices and policies can extend further and be replicated in other parks.

A fund-raising walk around Djurgården will be held on May 28th in order to raise money for the project and increase awareness about the difficulties faced by bees in Sweden.