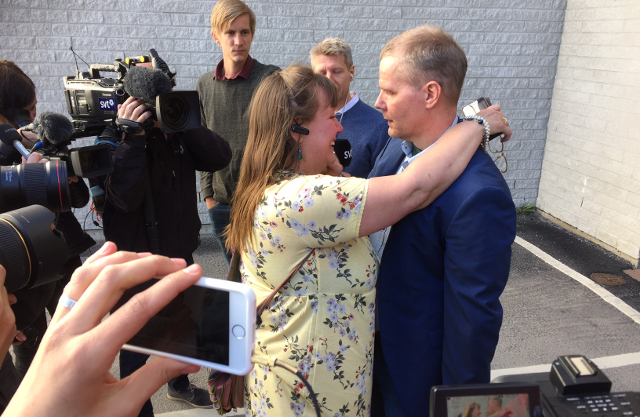 Kaj Linna being greeted by his sister after his release. Photo: Krister Stenlund/Folkbladet Västerbotten

He pleaded not guilty and had been trying ever since to get his case tried again, a request granted at the end of last year. And as the nine-day retrial came to an end on Tuesday the appeal court ordered the release of Linna pending verdict, a move experts agreed likely means that it will decide to clear him.

“I am happy, I don't know what to say. It is finally over,” a tearful Linna told the Aftonbladet tabloid.

The court said it would announce the final verdict on June 15th. Rather than clearing him of all charges, it could theoretically change the punishment to a fixed-term sentence, but experts said it was unlikely.

“This was completely predictable. You can't just conjure up evidence and in this case the evidence was almost embarrassing,” said Swedish legal expert Sven-Erik Alhem.

Prosecutor Jens Göransson admitted it was clear the court had chosen to overturn the lifetime sentence, but said he was disappointed and that it was still too early to draw any conclusions about the final verdict.

“I'm still hoping for a conviction. But I note they have not fully accepted my argument for life imprisonment, because then he would not have been released today,” he told the TT newswire.

Linna said he wanted 20-25 million kronor ($2.28-2.86 million) paid out in damages for his 13 years behind bars. In a similar case, a Swedish-Bangladeshi man who spent eight years in jail over the murder of a woman received 10.2 million in damages after it was found he had been wrongfully convicted in 2002.

Linna's case dates back to April 2004, when two brothers were attacked on a farm some 20 kilometres from Piteå. One of the brothers was killed; the other was assaulted but survived. The latter, who was disabled because of a stroke, was found by social services two days later and said he had recognized the voice of a man who had previously done business with the brothers and who they perceived as threatening.

The man, who had an alibi, instead mentioned Linna as a potential suspect and pointed police in the direction of another man who had more information, reported Swedish media last year. That man became the main witness at the trial and said Linna had told him of plans to rob the brothers.

The Supreme Court ordered the appeals court to retry the case after the witness, speaking to Swedish media, took back or changed the details of the account he gave to the police.