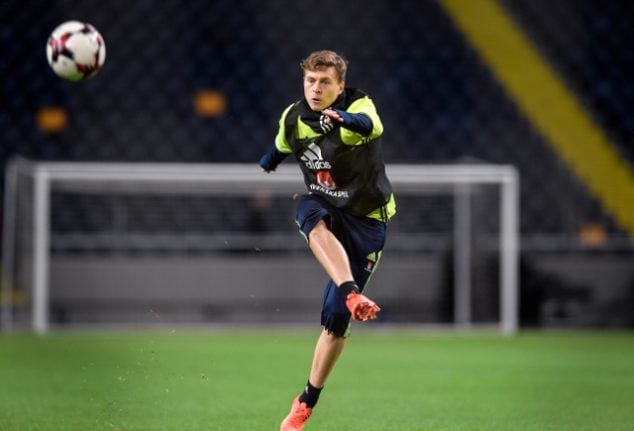 “I'm thrilled to be joining Manchester United,” said the 22-year-old after penning a four-year deal.

“I have enjoyed my time at Benfica enormously and I have learned a lot there. But I'm looking forward to playing in the Premier League at Old Trafford and for José Mourinho.”

Mourinho also has England pair Chris Smalling and Phil Jones at his disposal, along with Argentina international Marcos Rojo, while Dutch utility man Daley Blind has slotted into central defence on occasion.

“Victor is a very talented young player, who has a great future ahead of him at United,” said Mourinho on Wednesday.

“Our season last year showed us that we need options and quality to add depth to the squad and Victor is the first to join us this summer. I know that our fantastic group of players will welcome him as one of us.”

Lindelöf is United's first signing of the summer as they build up towards a Champions League campaign next season.

He told MUTV that he was ready to fight for his place in the team.

“Of course there are some great players here in my position,” said the Swede.

“I'm here to do my best to try to help the team as much as I can and it's always good to have other good players around you. When you have that, you get better as well.”

“I think every move means you have to adapt to a new environment but I feel comfortable in myself. I trust myself and it's going to be tough but I'm looking forward to it.”

“I always had a dream of coming here to play in the Premier League so, for me, it's a dream come true.”

United are also in the market for a striker, having included Zlatan Ibrahimovic, currently sidelined by a serious knee injury, on their list of players to be released.

Real Madrid striker Alvaro Morata is one name linked with a move to Old Trafford.

His agent said earlier this week that United had lodged a “very important offer” with the Spanish giants to try to bring him to Manchester.