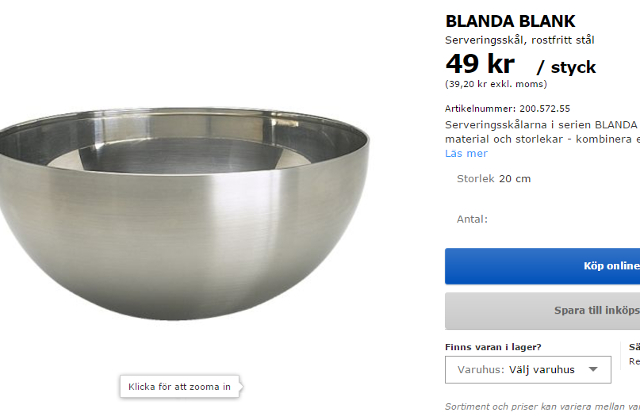 Richard Walter told the Aftonbladet tabloid he was eating grapes out of his Ikea 'Blanda blank' metal bowl in the sunshine during Sweden's weekend heatwave when he suddenly noticed a peculiar smell of smoke.

He first thought it came from the neighbours' barbecue party, but then looked at the bowl.

“I saw it was burning in the grape bowl. How is that possible, I thought. Then I saw there was one intense point where (the sun) hit the twigs, and that's where it started,” Walter told the Aftonbladet tabloid.

It appears the fire started when the bowl's shape caused the strong sunlight to reflect off its surface and concentrate the heat to one particular point. To prove to his friends that it really had happened, Walter then posted a video on Facebook using the bowl to burn a scrap piece of paper.

Watch the video below:

Ikea said it would look into the reports and carry out its own tests on the bowl.

On Wednesday he added in a written comment to The Local: “Product safety is always a top priority at Ikea and Ikea products are always tested to comply with applicable standards and legislations. In risk assessment for the bowl Blanda it has been established that many different parameters would have to converge for the content of the bowl to overheat and that the risk for this to happen is very low. The round design of the bowl further contributes to a very low risk of spreading, in case of any overheated material in the bowl.”

READ ALSO: Man gets his meatball stuck in an Ikea stool