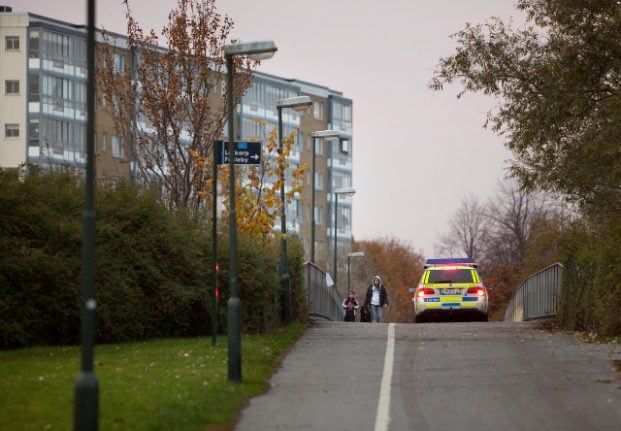 A police car in the Lindängen area of Malmö. Photo: Drago Prvulovic/TT

1. What are these vulnerable areas everyone's talking about?

This debate began in 2015 when the Swedish police released a list of so-called “vulnerable areas” as part of their work to map the situation in some of the country's segregated suburbs. An updated report has now been released, which is likely to be the focus of a lot of discussion in the run-up to Sweden's general election in 2018.

The police definition of a “vulnerable area” is: “a geographically defined area characterized by a low socio-economic status where criminals have an impact on the local community. The impact is linked to the social context in the area rather than a wish to take power and control the community.”

An “especially vulnerable area” is “characterized by social issues and a criminal presence which has led to a widespread disinclination to participate in the judicial process and difficulties for the police to fulfil their mission. The situation is considered acute”.

In especially vulnerable areas religious extremism is often prevalent (terror expert Magnus Ranstorp has told The Local that these are often hotspots for recruitment to militant groups). They are also areas where police regularly have to adapt their methods to the volatile situation and residents often do not report crimes, either out of fear of reprisals or because they think it will not lead to anything.

A “risk area” lies somewhere between the two.

Especially vulnerable areas, according to the police's 2017 report: Well, not really. This term caught on in international media after it was used by a columnist to label these areas, but police and emergency services have themselves repeatedly rejected it, arguing that these are areas with a higher police presence, if anything. That said, emergency services do often adapt their behaviour, for example by making sure that there is proper back-up, by entering the areas via alternative routes, or by reversing their vehicles into the areas in order to make sure they are able to leave quickly if needed. Emergency services have, for example, been exposed to threats, stone-throwing, or vandalism of their vehicles. But it's not black and white: often, nothing of note happens.

A fire chief in an area which covers some of northern Stockholm's most vulnerable suburbs, including Rinkeby and Tensta, told The Local earlier this year: “We don't have any no-go zones, absolutely not, the opposite in fact. We move around in all areas, with the same force, at the same speed. But sometimes we get indications, or see, that something is not right and then we take precautions.” Firefighters after riots in Rinkeby in February 2017. Photo: Christine Olsson/TT

3. Why has the number of vulnerable areas increased?

In the police's report from December 2015 the number of vulnerable areas was 53; in the 2017 report the number had increased to 61, with the number of especially vulnerable areas increasing from 15 to 23. Partly, it's because the situation has indeed deteriorated in some of these areas. But the main reason, according to the police themselves, has to do with research: the police have stepped up their work, and data collection, in these areas in recent years, and consequently know more about the situation.

“Primarily it's to do with the police getting better at analyzing and identifying these areas,” criminology expert Manne Gerell of Malmö University, whose research makes up part of the report, explained to The Local. Yes and no. There are currently around 5,000 criminals and 200 criminal networks in these vulnerable areas, according to police estimates. In most cases, these are not well-defined 'gangs', but loosely structured and vaguely hierarchical criminal networks. This in itself is nothing new. Sweden has battled gang violence for years. What has changed is that the violence between criminals has escalated: they have gone from shooting their victim in the leg to make a point, to shooting to kill. The general public is not the target  – the shootings stem from conflicts within and between gangs – but there have been incidents when innocent bystanders have been harmed or even killed.

The people involved in these conflicts are also getting younger. “Teenagers have both been the victims of and carried out shootings and it happens that children aged around nine help older people transport weapons and narcotics,” reads the police's own report on vulnerable areas.

Should you feel unsafe? Probably not. In general, deadly violence in Sweden has gone down since the 90s. The number of deadly shootings, however, is up, which can be linked to these criminal gang conflicts. Police after a shooting in Seved in June. Photo: Johan Nilsson/TT

That's a complicated question. On the one hand, these areas are not considered vulnerable for nothing. The situation is serious. On the other hand, it's not all bad. For the majority of residents, the truth is that life goes on as normal most of the time. “What's often forgotten is that a lot has actually got better in vulnerable areas and many of those who live there are content, and are not scared,” Malmö University's Gerell told The Local.

A recent report by Sweden's National Council on Crime Prevention (Brå), which keeps statistics on crime, even suggests a positive trend: that fewer people in vulnerable areas are falling victim to crime, men and women alike, and this figure is actually decreasing at a faster rate than in other areas of Sweden.

It is also important for readers to remember how the media narrative works. The media, us included, tend to report incidents when they happen, not when they don't happen. Or as one man who grew up in one of Sweden's most vulnerable areas put it to The Local when we visited the Seved area of Malmö: “There are a lot of people on low incomes with immigrant backgrounds you know, but most young people, the children of parents who have come here, are studying and have jobs. But there's also those who went wrong and ended up outside of society, and then they get all the headlines because no one goes to interview an average young person studying at university. So it's a little bit of seeing what you want to see.”

READ ALSO: How Rinkeby residents feel about the riots The Local in the Seved suburb in June. Photo: Emma Löfgren/The Local