“A few days ago I was alone and isolated in the Sahara. Today I am here together with my family. I am home,” he says in a video message sent to the TT news agency.

Gustafsson, who returned home to Sweden on Tuesday after more than five years in captivity, says he would like to thank everyone who helped secure his release.

Sitting in the grass next to a lake and surrounded by his family in the Swedish summer sunshine, it is a setting very different from his years in captivity in Mali. He is visibly moved in the clip and his voice is unsteady at times, but he is smiling and relieved laughs can be heard from his family.

“I feel fine. I feel better than fine,” he says. “I'll keep my beard until my siblings' children get to take care of it,” he laughs, making a cutting scissors movement with his hand.

Keep scrolling down to watch the video. Gustafsson, 42, was abducted in Timbuktu, northern Mali, in November 2011 along with South African national Stephen McGown and Dutchman Sjaak Rijke.

He was on a motorcycle trip from Sweden to South Africa when he and the other two were seized along with several other Westerners by a group of armed men while on the terrace of their hotel.

Rijke's wife managed to escape, but a German who tried to resist the abduction was killed.

Al-Qaeda's North African affiliate al-Qaeda in the Islamic Maghreb (AQIM) claimed responsibility for the kidnappings. It was one of several jihadist groups that took control of Mali's north in 2012 before being ousted by a French-led military operation launched in January 2013.

Rijke was freed in April 2015 by French special forces. McGown's father said he had spoken to Gustafsson, who had said that McGown was alive and well at the time of his release this week.

Swedish authorities have not released details of how Gustafsson was released. 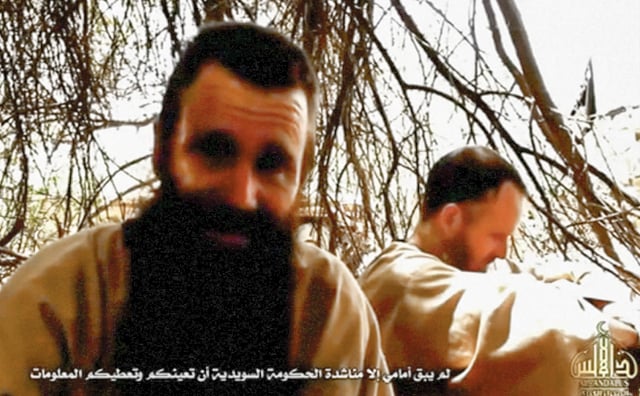