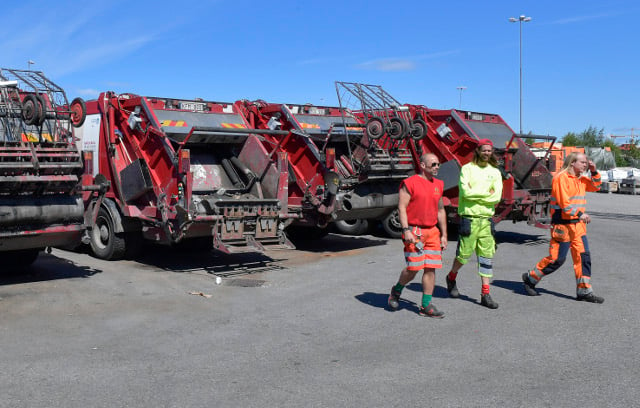 The start of sudden strike action on Wednesday meant that 10,000 households in the Swedish capital did not have their trash collected as scheduled that day.

The employees of waste collection company Reno Norden started a so-called wildcat strike on Wednesday morning (a sudden strike not backed by unions) in response to salary changes due to begin in October, which workers argue will mean doing more for less.

Reno Norden is one of a number of different companies that currently have waste collection contracts in Stockholm. It held meetings with union representatives and staff on Wednesday, but no resolution was found and they continued into Thursday. Then, at around 1pm, the union said it fired around 50 members of staff.

“The environmental workers at the company Reno Norden who took part in the last two days' strike have now been dismissed. As a result, negotiations between Transport and the trade organization the Swedish Confederation of Transport Enterprises (Biltrafikens arbetsgivareförbund) are closed,” the Swedish Transport Workers' Union (Transport) said in a statement on their website.

But Reno Norden's CEO Peter Ekholm told the Expressen tabloid no one had yet been fired.

“It's not true, but if the illegal strike continues they risk getting fired. But they haven't got fired yet, there's a difference,” he said.

At around 5pm the Transport Workers' Union said they had now been told the workers had not been let go.

“If they go back to work they keep their job,” chairman Tommy Wreeth told the TT newswire.

However, it was unclear whether or not the strike would continue on Friday.

The firm now needs to provide Stockholm waste management company Stockholm vatten och avfall with a plan for how it will get waste collection back under way as soon as possible. That could mean manning trucks with staff from different companies.