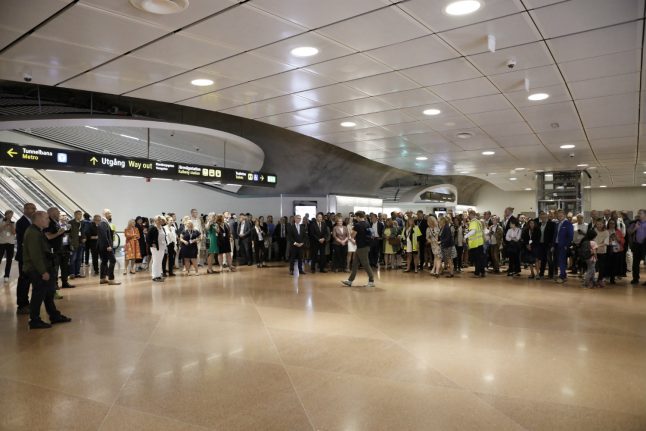 After years of drilling and blasting, the sinking of a tunnel into the Riddarfjärden bay, and the extraction of four million tonnes of earth, the Citybanan is finally ready.

The first commuter train entered the tunnel under Stockholm on Monday.

“At last we are ready, and we know what benefits there will be. It feels good to be able to hand [the train line] over to commuters,” Kjell-Åke Averstad, project manager for the Citybanan, told TT ahead of the opening.

The two new stations and tunnels that form the Citybanan will primarily be used by commuters within Stockholm.

“The stations are really neat. Not only will traffic improve, it will also be a lot more pleasant to wait for the train,” said minister for infrastructure Anna Johansson, who was at the tunnel’s official opening Sunday.

But Johansson added that Citybanan had been built for the benefit of both freight and passenger infrastructure, since it will remove commuter trains from the Getingmidjan stretch between Stockholm Central and Stockholm South stations, a notorious bottleneck point for rail traffic.

IN PICTURES: Check out what Citybanan's new stations look like The route of the Citybanan under Stockholm.

“All other rail travellers in Sweden will benefit greatly from this, with reduced risk of delays, better punctuality and better options for people who want to travel by train and carry things on the train. So this has been a good day’s work,” Johansson said.

Averstad that he felt a certain sense of regret at saying farewell to colleagues he had worked with for several years.

The project manager also mentioned the five people that lost their lives in accidents during the construction of the Citybanan.

“That is something that has affected us all greatly. Of course we are thinking about it, especially on a day like today,” he told TT.

The Getingmidjan stretch, that runs from Riddarholmen to Gamla Stan, was built in 1871.

Averstad said the new Citybanan had been designed to last just as long.

“You might hope that development will be faster in future, because needs will increase. But the Citybanan is built to last over a hundred years,” he said.

READ ALSO: All the news on the Citybanan