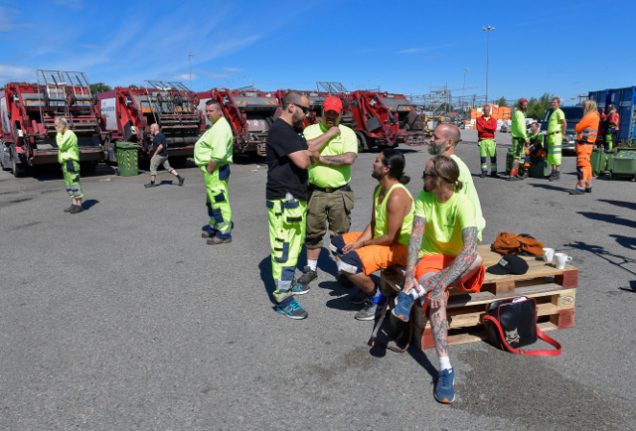 The Swedish Labour Court on Friday ordered 29 waste collectors in Stockholm to return to work after they walked out last week in what the labour court ruled was to be considered unlawful strike action.

Swedish labour rules normally do not permit industrial action during the term of a collective bargaining agreement, which is negotiated between the labour unions and the employers.

But waste collectors employed by Reno Norden started a wildcat strike on July 5th in response to salary changes due to be rolled out in October, which staff argue will effectively mean working more for less.

The discontent had been brewing for some time and erupted into a full-blown row when the company last week attempted to collect all keys to waste trucks and stations in Stockholm to create a digital key register.

According to waste collectors, the move makes it easier for their employers to fire them.

According to the latest available information from the Swedish Confederation of Transport Enterprises, 31 workers at Reno Norden in Stockholm have called in sick and 46 people have quit their jobs. Most of the 29 people told to return to work are part of the latter group, reports Swedish newswire TT.

The Transport Enterprises argue the workers are obligated to carry out their contracted work duties for the duration of their one-month notice period.

However, one of the striking waste collectors told Swedish radio: “We know the strike is illegal, but we will not go back to work. We can't accept the premises given to us by Reno Norden.”

There is also another conflict brewing in Malmö, where Transportarbetaren reports workers employed by Reno Norden launched a work-to-rule strike on Thursday. The conflict led to a row which resulted in police being called after a health and safety representative claimed that a manager had put him in a choke hold.