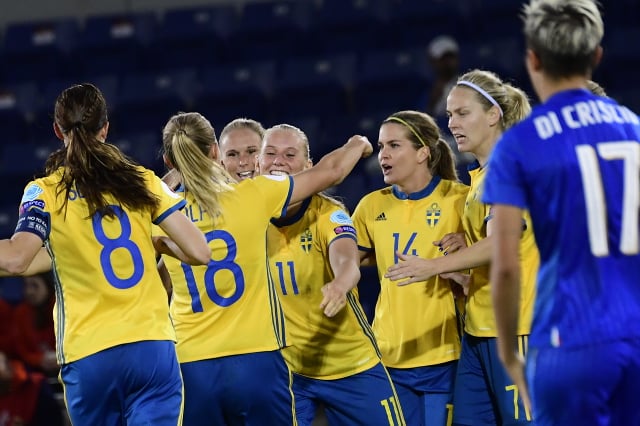 Sweden have progressed to the quarter-finals of Women’s Euro 2017 despite a surprising 3-2 defeat to Italy.

Daniela Sabatino put Italy ahead in Doetinchem after four minutes when Sweden defender Linda Sembrant accidentally knocked down a cross for her inside the box.

Swedish striker Lotta Schelin equalized from a penalty following a foul on Stina Blackstenius by Federica Di Criscio, but Sabatino eventually gave Italy the lead again before half-time when she volleyed home a cross from Linda Tucceri Cimini.

The back and forth continued when Blackstenius equalised for Sweden two minutes after the break, firing in a cross from half-time substitute Fridolina Rolfo, but Cristiana Girelli forced in a cross from Barbara Bonansea five minutes from the end.

Sweden were trying to impose themselves, but Italy were more dangerous on the counter-attack, with Bonansea first going close and then seeing her curling strike excellently clawed away by Hedvig Lindahl.

Playing her last international game, Melania Gabbiadini fired into Lindahl and Sabatino then missed with a rebound.

In the second half, Sweden stepped up their pressure, with another half-time substitute Lisa Dahlkvist first having her header cleared off the goalline and then steering a low shot wide. Sembrant headed wide, while Blackstenius slammed her header into the upright on 78 minutes.

After Girelli's goal, Sweden were lucky to see Bonansea fail to add a fourth and then have a stoppage-time shot stopped by Lindahl.

“(But) at the end of the day we reached the quarter-final and I'm happy about that,” she said, praising her team for the 25 minutes after the break when Rolfo and Dahlkvist breathed life into their performance.

Italian coach Antonio Cabrini said Italy could build on the result which he hailed as “a very important victory”.

“I'm happy for the girls because they promised they would give everything on the pitch and they did.”

Despite the defeat Sweden still progressed as runners-up behind Germany thanks to Russia’s 2-0 defeat to the Germans in Tuesday’s other Group B match, and Sundhage’s side will now face hosts the Netherlands for a place in the semi-finals.