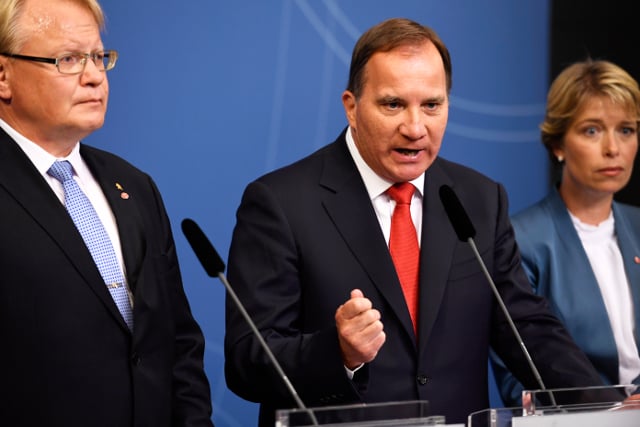 The Sweden Democrat party, which is known for its anti-immigration platform, drops by 3.5 percentage points in the latest election poll by Demoskop on behalf of the Expressen tabloid.

That puts support for the party at 16.6 percent, which means it also loses its place as the second-biggest party in the polls to the centre-right Moderates, whose support grows to 17.2 percent.

However, another poll also released on Thursday still has the Sweden Democrats as the second-largest party, with both it and the Moderates seeing a slight drop (more information below).

The Social Democrats, the main party in the centre-left government coalition with the Greens, meanwhile sees its support grow from 27 percent in the latest Demoskop poll to 28.4 percent.

That is despite a recent government crisis sparked by a major data leak at the Swedish Transport Agency when key information was made available to IT workers in other countries who had not gone through the usual security clearance checks. Prime Minister Stefan Löfven was forced to let two government ministers go in response to the threat of an opposition-led no-confidence vote. The crisis is not over yet as the opposition still threatens to call a vote of no confidence after the summer recess. However, the Demoskop poll was carried out after the peak of the crisis, which appears to indicate that the Social Democrats have so far survived the fallout unscathed in the eyes of voters.

The other smaller parties all show a slight increase, with the Centre Party now at 12.9 percent, the Greens at 4.4 percent, the Liberals at 6.4 percent and the Christian Democrats at 4.0 percent.

Pollsters quizzed 1,250 randomly selected voters about their party preference between August 1st and 8th. The Sweden Democrats' drop is the only change that is outside the margin of error.

Another survey by Novus on behalf of public broadcaster SVT, interviewing 2,000 people between July 31st and August 6th, still has the Sweden Democrats as the second-largest party with 18.7 percent support (down 1.3 percentage points), ahead of the Moderates at 15.2 percent (down 0.7 percentage points).

The Novus poll also suggests strengthened support for the Social Democrats at 29.3 percent (up 2.0 percentage points). All changes since their previous poll at the end of May are within the margin of error.

The Green Party is below 4 percent in both the Novus and the Demoskop poll, which means it would not get any seats in parliament if an election were held today.