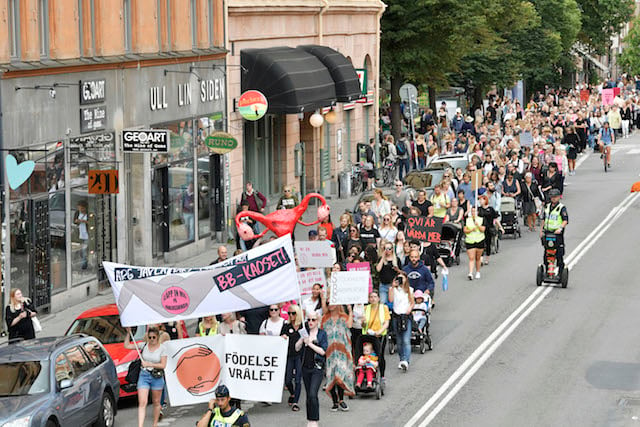 Protesters in Stockholm. Photo: Jonas Ekströmer/TT
In 16 Swedish towns and cities demonstrators Demonstrators — including midwives and members of the public — took to the streets to march for better maternity care.
READ ALSO: More mums flown to Finland to give birth due to overcrowding at Swedish hospital
Around 170 protesters had gathered in Jönköping in southern Sweden. Emily Wallstedt, one of the organizers, said there had been no response yet from the county council politicians, but she remained hopeful.
“Hopefully it sends a clear message that it's members of the public, and not an organization, who have had enough. The ball is in the politicians' court; they need to listen to the people and to the midwives,” Wallstedt told TT newswire.
Organized by Födelsevrålet, a non-profit representing pregnant women who have experienced problems during childbirth, the demonstrations follow a number of high-profile stories from recent months exposing the strained maternity care situation in Sweden.
In January, two Swedish midwives made international headlines when they launched a course instructing expectant parents on how to give birth in a car, as the pending closure of Sellefteå’s maternity ward would mean a journey of up to 200 kilometres to the nearest ward. The Sollefteå maternity ward subsequently closed as planned due to cost-cutting measures, despite protesters occupying the building.
READ ALSO: 'No time to change sanitary products': Swedish viral image shows tough side of being a midwife
Other stories to grab headlines include a Swedish midwife who went viral when she explained that there is no time to urinate or change sanitary products during night shifts at a Stockholm hospital, and instances of families being flown to Finland to give birth as an emergency solution to overcrowding at Swedish maternity wards.