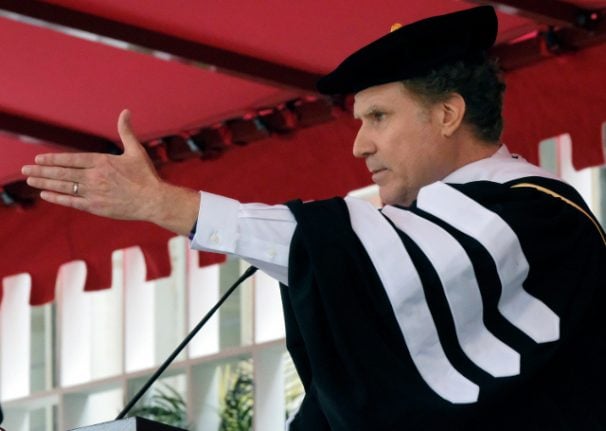 Will Ferrell giving a commencement speech at the University of Southern California. Photo: AP Photo/Richard Vogel

Ferrell has teamed up with CBS Films to star in and produce the remake together with Adam McKay and Jessica Elbaum as part of their company Gary Sanchez Productions.

Felix Herngren and Henrik Jansson-Schweizer, who created the Swedish movie version, are executive producers and Joshua Mehr is to co-produce, according to Hollywood Reporter.

REVIEW: The 100-Year-Old Man Who Climbed out the Window and Disappeared

Based on Jonasson's novel by the same name, the 2013 Swedish movie adaptation – released internationally in 2015 – saw one of Sweden's best-known comedians, Robert Gustafsson, play Allan Karlsson, who escapes his retirement home and embarks on a roadtrip involving gangs of criminals, large sums of cash… and an elephant.

The huge international hit became Sweden's highest-grossing film of all time and was nominated for an Academy Award for best hair and makeup. A sequel – 'The 101-Year-Old Man Who Dodged The Restaurant Bill And Disappeared' – premiered in Sweden last year.

Gustafsson received a lot of praise for his portrayal of the still-young-at-heart Allan Karlsson, but Jonasson said he also looks forward to seeing Ferrell in the role.

The author told Hollywood Reporter in a statement: “My character, Allan, knows the art of being funny just by being.”

“That is something Will Ferrell masters to perfection. Great humour with small measurements. I am happy that Allan is now in his hands.”

Ferrell is not unfamiliar with the quirks of Swedes and Sweden.

The actor, who is married to Swede Viveca Paulin and owns a summerhouse in Gnesta south-west of Stockholm, has often celebrated the Scandinavian country in American television appearances.

Two years ago a video of him performing a version of a popular Swedish drinking song with Oscar-winning Swedish actress Alicia Vikander went viral, while he has even been known to take part in the Swedish national sport of winding up the Norwegians.