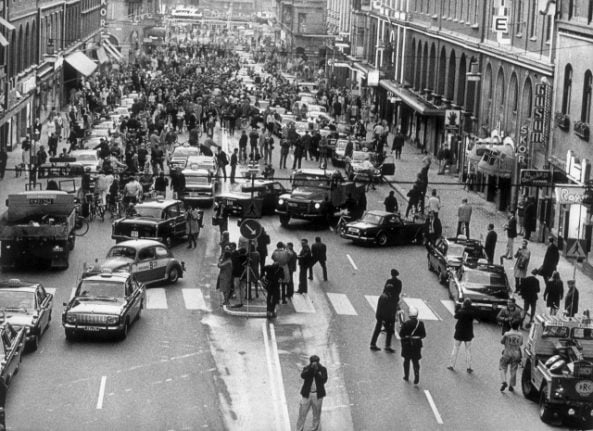 Cars switching to the other side of the road on Kungsgatan, Stockholm, at 5am on September 3rd, 1967. Photo: Jan Collsiöö/TT

H Day (the H stands for 'högertrafik' – right-hand traffic in Swedish) was an historic and potentially catastrophic moment that in the end unfolded as smoothly as anyone could possibly have imagined.

There had of course been meticulous planning ahead of the momentous occasion, including government-led education campaigns as well as a right-hand-traffic-themed song-writing competition by public broadcasters. This was the winner. Never say Swedes don't know how to have fun.

On September 3rd 1967 all non-essential traffic was banned from the roads between 1am and 6am; in Stockholm and Malmö the ban was in place from 10pm on September 2nd to 3pm the next day.

At 4.45am, all cars still on the road stopped, slowly crossed to the opposite side of the road and stopped again, awaiting the next signal. At 5am the radio announced that Sweden had officially switched to right-hand traffic, and that was the uneventful story of how Sweden stopped driving on the left.

The move was not entirely uncontroversial. In 1955 almost 83 percent had voted against it in a nationwide referendum, and many people had predicted that it would lead to serious accidents and injuries.

“It was an awfully big project, probably the biggest ever in Sweden. I highly doubt we would manage something similar today. Suddenly at the same time everyone had to change their habits and behaviour. Some researchers warned there would be a bloodbath, but it was extremely successful,” Claes Tingvall, professor and former director of traffic safety at Sweden's road authorities, told the TT news agency. At 5am on Sunday, 2017, drivers of classic cars dating back to 1967 or earlier reenacted the historic moment on the Kungsgatan street in central Stockholm (which was closed off for the occasion).

“I got the idea three months ago. It was such a big event I thought it ought to be celebrated, and apparently more people had the same thought.”

Watch the 50-year-anniversary event in the embedded video below.