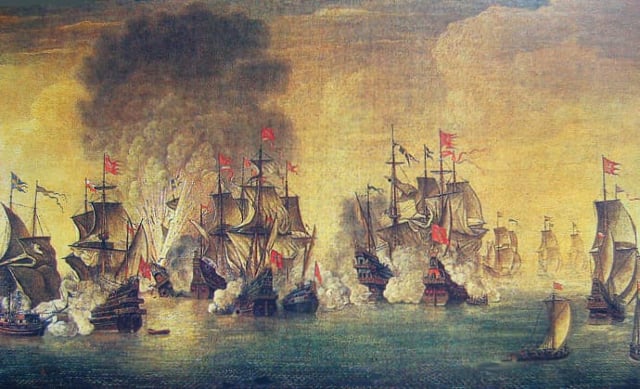 Stefan Płużański's painting of the Battle of Oliwa in 1627, in which Scepter may have participated. Photo: Wikimedia Commons

Swedish archaeologists believe they have identified a shipwreck discovered in the capital as the more than 400-year-old warship 'Scepter', built in 1615 as one of the flagships in King Gustav II Adolf's fleet.

It was found in the summer during the renovation of the quayside on the Skeppsholmen islet which Stockholm Maritime Museum experts had been called out to oversee, marine archaeologist Jim Hansson told The Local.

“We were really surprised, because we have some old maps that show some wrecks from the early 1800s, and it seems like the older wrecks don't show up on the map. There were no indications of this wreck on the maps,” he said, adding the remains uncovered include a section of the ship two metres up from the keel and parts of the transom.

“It was really well preserved. It is only to the first deck level, but you can still see the cut marks from the axes on the timber, for example. It's been really nice to excavate the parts.” The remains of the ship. Photo: Jim Hansson/Stockholm Maritime Museum

“We took some chronological samples in the summer and we received the results which showed that wood is oak from Sweden, and it was cut in the winter between 1612 and 1613, which is a really good, precise measure. We then looked at the lists of the warships made at that time, and we found there were four big ships that were built then,” he said, adding that the process of elimination suggests it is Scepter.

Scepter was built by Dutch shipbuilder Isbrand Johansson, weighing 800 tonnes and carrying 36 guns. She had an eventful life, including a journey in 1621 when she was part of a 148-ship fleet attempting to conquer Riga, with the King on board, but only made it to Pärnu, Estonia, after getting caught up in a storm.

In 1639 she was retired and was deliberately sunk at Skeppsholmen to form part of the foundation of a new shipyard being constructed at the islet in central Stockholm at the time – 17th-century recycling methods.

Historic vessels are a fascinating, but not unusual, discovery in the Swedish capital's shipwreck graveyard. Another view of the shipwreck. Photo: Johan Runer

“It's a really important find because the ship is from the generation before Vasa, so we can see the technical building methods that were used, and it can help us understand what went wrong with the Vasa as well,” said Hansson, referring to Sweden's most famous warship, which sank on her maiden voyage in 1628. It was later salvaged, found to be largely intact and has since become one of Sweden's most popular tourist attractions.

But he emphasized Scepter will not be turned into another attraction in the style of the Vasa Museum.

“Definitely not. It is so expensive to preserve the Vasa, so we would need to find a really spectacular ship down here if we're going to build something like that. We've done some 3D photographs of the wreck, and documented it properly. And with the history, we are able to show so much about this ship already,” he said.

The wreck has for now been left in approximately the same place as where it was found, and archaeologists will be on site as the renovation work continues, to be able to salvage any other marine treasures unearthed.

Where the shipwreck was found: