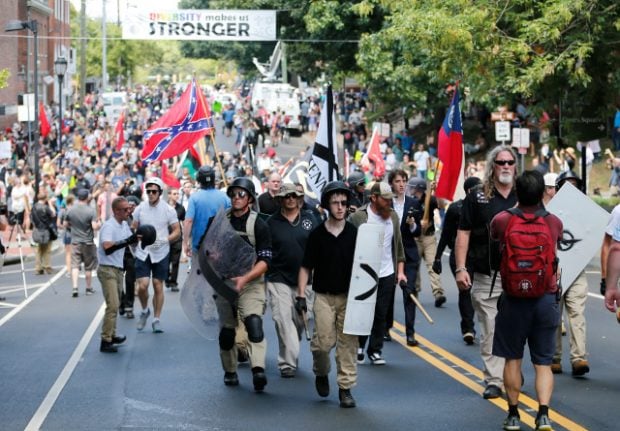 Hermansson spent a whole year with far-right extremist groups in the UK and US on behalf of anti-racism organization Hope Not Hate. Pretending to be a Swedish student writing about the suppression of right-wing speech in Sweden, he met and spoke with alt-right members, while wearing a hidden camera. He recorded one founding member claiming he had links all the way to the Donald Trump White House Administration.

His work forms part of a new report 'The International Alternative Right', which takes a closer look at some of the alt-right key figures, many of whom are Swedes at the frontline of the international extremist movement. The most in-depth report of its kind, it and Hermansson's undercover work quickly grabbed global headlines.

Hermansson spoke to The Local on Skype from New York on Wednesday, after revealing his true identity in interviews with the New York Times, Dagens Nyheter and Swedish anti-racism organization Expo.

You went undercover for a year. Explain how that happened?

I've been working for Expo in Sweden for a couple of years and done various things, so I've considered myself an anti-fascist for a long time. Then I moved to London to start studying, and I asked some colleagues from Expo to put me in touch with Hope Not Hate, so I could continue helping out in whatever way I could.

I wouldn't have expected them to ask me to go undercover, but they did and I said yes, for the same motivation as other anti-fascim work I've done before. I think fascism is probably the biggest threat to the society I want to live in, so I want to do something to stop it.

Then of course, it was exciting and I felt like I could do it.

What was the most surprising thing you learned?

There were many surprising things. For me how social these organizations are is important, and surprising.

They're not just doing political campaigning or serious conferences or demonstrations, but they organize barbecues and picnics, go to gallery openings, concerts, and just have a beer in a pub. Most of the time I spent with them was some type of social activity.

Of course they plan other stuff and they talk about politics, but I think many of the people there are there for social reasons. It provides a context for them as friends. Many of the people have most of their friends in these organizations. And of course there's a danger in that, because it makes it more difficult to get out.

Sweden seems to be a very important concept to the alt-right and I understand you even used your Swedishness to manage to get inside. Why are they so obsessed with Sweden?

There are many reasons for their obsession with Sweden. One is just like the German Nazis did in the 1930s. Sweden, or Scandinavia, has always been important. It has been considered as Aryanism, as the origin of the white race, the Aryan people and therefore it's significant, it's about racial purity. And they think that way, they still do. There's this imaginary idea of a pure Sweden.

Then after Sweden taking quite many immigrants in 2015 the far right or the alt-right have tried to paint a picture of Sweden as a 'failed state' where rape is going up, et cetera, and that this is because of immigration. This has to do with Sweden as a symbol of left-wing society, so to draw the picture of Sweden as failing is important in order to discredit the left more broadly as 'cultural Marxism', as a self-destructive ideology.

So then to come to the UK or the US as a Swede it is very easy to have a conversation about this and people will very quickly agree with you when you say that “the Sweden I remember has been destroyed” and they will trust you.

READ ALSO: Why Sweden is NOT the rape capital of the world

What was it like being undercover in that way? Were you ever scared?

Of course. There are moments when you are really scared. I was in Seattle, in Washington State in the US, with a white supremacist group. I was at a barbecue and when I got there there were maybe 25-30 mostly young men.

I know that they are all part of a broader group, so I ask them what they are about and they say “we are all about the 14 words”, which is a white supremacist slogan*. These are armed and they are openly national socialist and they were talking about what they would do with anti-fascists and Jews and black people if they would show up there or do something to their brotherhood. Of course, then I was scared. I mean, there was this combination of a group of young men with guns and a violent ideology. That's not a great combination.

*The “14 words” is a reference to a slogan used by white supremacists, usually taken to mean: “We must secure the existence of our people and a future for white children”

You mentioned some of the different Sweden images, and sometimes these seem quite counter-intuitive. On the one hand, there's the idea that feminists are oppressing Sweden, and on the other hand there's the idea that women in Sweden are being oppressed by Muslim immigrants. How do these two ideas fit together and do they genuinely believe all of that at the same time?

We shouldn't always try to rationalize these opinions, because it's going to put us in some sort of corner where we can't find our way out, because it doesn't always make any sense. But yes, they do, both those ideas, and they are said very frequently by the same people and in the same evening.

So (they believe that) feminism is one of the biggest threats – it's part of the left. That and the Jews are important and they connect feminism with Jewish world conspiracy as well, sometimes. So that's a problem, because it's egalitarian and these people are anti-egalitarian: people are different and should therefore not be made out to be equals, that's a threat that will lead to the degeneration of society.

At the same time, building on that, these people see the women of a country as the property of that nation, so then if a foreign, so to say, 'invader', is a threat to women, which they also make it out to be, then that's also a threat. So it is quite compatible to have both, I guess, if you think the way they do.

Your work is just one part of Hope Not Hate's investigation into the international alt-right movement. What is the main thing you want people to understand about how this movement works?

There's so many parts to that question. One of the things that we put in the report is that it is not just about race. It's often put that these people are racist, and yes they are, they are very, very racist. But more than that, the way they radicalize people and the way new people join, and other things they consider threats to society are not really related to race. It's feminism, for example, it's young men feeling attacked by feminists and coming to the alt-right for that reason, because it's anti-feminist and these people disliking the left.

You need to see it as a broader thing. It is an anti-egalitarian movement, so they are against everything that is egalitarian.

After this whole experience and learning so much about them, did you learn anything new about yourself doing this?

To a degree you learn limits, what you can do… it's a completely new type of pressure for me to go to a barbecue in Seattle with white supremacists, or to speak at their conference. It's a completely new type of stress. You learn how to manage that stress and how to manage that anger with these people while you're with them, not giving away what you really feel about things and how capable you are of that when you really try.