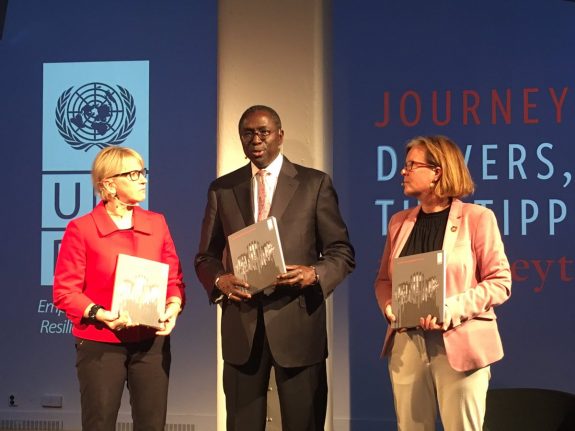 “As I stretch my hand, trying to reach out to my friends, I touch human flesh.”

This was part of the moving testimony of Ahmed Hadji, a survivor of the 2010 Al-Shabaab bombings in Kampala, Uganda. Hadji was speaking at the Fotografiska Museum in Stockholm, at the opening of a new photo exhibition: “Survivors: Stories of Survivors of Violent Extremism in Sub-Saharan Africa”.

He was one of the survivors portrayed by Swedish-Eritrean photographer Malin Fezehai in the project, a collaboration with UNDP, the UN Development Programme. She photographed and took the testimony of survivors of extremist violence in Burkina Faso, Cameroon, Côte d’Ivoire, Nigeria, Somalia, and Uganda.

“I'm a survivor. Not a victim. I want to use my voice as a positive force for tolerance, dignity, and love”, said Hadji.

The UNDP estimates that between 2011 and early 2016, 33,300 people lost their lives to violent extremism in Africa. The photographic project’s aim is to shed light on the plight of the survivors and give voice to those who often suffer in silence.

The exhibition was held together with the launch of UNDP’s latest report, ‘Journey to Extremism in Africa: Drivers, Incentives, and the Tipping Point for Recruitment’. The main findings of the report were also presented at Fotografiska.

“It is both a great pleasure and an honour to host such an important and timely report here in Stockholm”, said Sweden’s Foreign Minister Margot Wallström, who attended the event along with Carin Jämtin Director-General of Sida, the Swedish International Development Agency, and two high-ranking diplomats, Ambassador Fredrika Ornbrant, and Ambassador Staffan Tillander.

They joined Mohammed Yahya, UNDP Africa Regional Programme Coordinator, and Abdoulaye Mar Dieye, Assistant Administrator and Director of UNDP’s Regional Bureau for Africa, who were presenting the report, and Dr Robert Egnell, an expert from the Swedish Defence University.

The report found that the majority of people who join violent extremist groups in Africa come from peripheral areas that have suffered generations of marginalisation, their parents were less involved in their upbringing, and they did not attend school for a long time.

Among other things, the report found that more than half of voluntary recruits report religious reasons for joining violent extremist groups, but at the same time 57 percent of respondents admit they do not read, or have little to no understanding of the religious texts or interpretations.

Most recruits express frustration at their economic situation, and employment is the most cited need in the time of joining, followed by security, and education.

“Of course it is a very attractive offer to get both a gun and maybe $300 when there is absolutely nothing else,” Wallström told the audience, recalling discussions she had when visiting Swedish troops participating in a UN peacekeeping mission in Mali.

There is a high level of distrust in government institutions and security forces, and the final trigger for joining a violent extremist group is, for 71 percent of the recruits, government action.

“Research into the processes of radicalization and recruitment has emphasized the frequently sociable nature of these processes, with peer groups playing an important role,” the authors wrote.

One of the most important findings of the report is that recruitment is a highly social and localised process. It is not done over the internet, but usually through friends and acquaintances at a local level. Around 80 percent of the recruits joined within a year of hearing about the group, and nearly half of them joined within a month.

With this in mind, Hadji co-founded, alongside his colleague Hassan Ndugwa, the Uganda Muslim Youth Development Forum, aimed at combatting radicalisation amongst Muslim youth.

“I wanted to be seen as a role model to the younger generations,” he explained.

“We are a new movement to encourage people to understand and not to take everything that is thrown at them. I am working with colleagues in Somalia, Kenya, and Tanzania, so we can be a movement of credible voices. I’m a survivor with a mission.”

Grassroots initiatives like these are of paramount importance, given the social and localised nature of recruitment.

On a national level, however, work still needs to be done. Poor economic conditions and prospects, as well as a lack of education, play a significant role in recruitment processes as well, which highlights the importance of development.

A lack of trust in government institutions, politicians, and security forces shows the importance of improving governance, a process that can be enhanced when local, regional, and international stakeholders work together.

“What UNDP has done here, it has paved the way for a developmental approach to dealing with violent extremism. Now, we all agree that this is important”, said Amabassador Tillander.

Sweden also has a role to play through efforts by organisations such as Sida and the Folke Bernadotte Academy, both of which support international peace and development around the world. Jämtin stressed the value of the UNDP report in shaping the approach of Sweden and other countries in tackling the issue.

“This research by UNDP will increase our knowledge and strengthen our partnership,” she said. “We need to focus our attention on the need for preventive measures.”

“Good governance, the respect for human rights and the inclusion of all groups are important for states to deliver regardless of location, be it in the North of Europe or Central Africa. The conclusions of the report tell us that Sweden’s integrated conflict perspective in our development cooperation is highly relevant.”