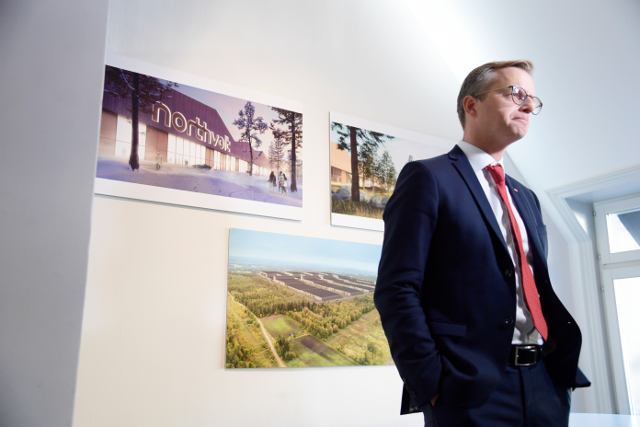 The company said it had selected Skellefteå, a coastal town in the country's industrial north-east, for the site which will employ up to 2,500 people.

Sweden's main nickel, cobalt, lithium and graphite deposits are nearby.

An associated research centre employing 300 to 400 people will be located in Västerås, some 150 kilometres west of Stockholm and the original headquarters of Swedish-Swiss ABB, which has partnered up with Northvolt for the project.

READ ALSO: 'The tech sector should lead the move away from cities' “Sweden has a unique position to establish large-scale battery production to support this transition with its clean and affordable energy, proximity to raw materials, and a strong industrial tradition deep in its DNA,” he said. Artist's impression of what the factory will look like. Photo: Northvolt

Sweden's Enterprise and Innovation Minister Mikael Damberg said it was “a great day, not just for the two chosen cities but also for Sweden and for Europe”.

Construction of the factory is to start in the second half of 2018, and it is expected to raise production progressively between 2020 and 2023. Once fully operational, the site is to produce lithium-ion batteries totalling 32 Gigawatt hours (GWh) per year.

The project requires an investment of four billion euros ($4.7 billion) over six years for which financing is already covered.

The factory comes in response to Tesla founder Elon Musk's 'Gigafactory' in the US state of Nevada where production debuted in January and which Tesla hopes to eventually ramp up to 150 GWhs.

In addition, Tesla is mulling plans for another such factory, this time in Europe, with several countries happy to have it, including Sweden and France.

Northvolt's factory will be aimed not only at electric cars and other vehicles, but also at renewable energy producers looking for electricity storage, as well as industrial companies.