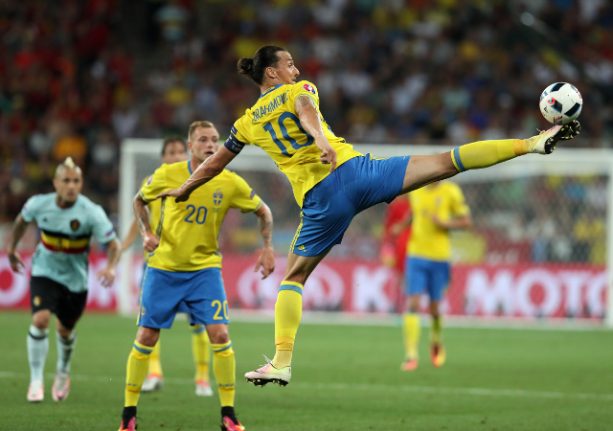 Daniele De Rossi expressed relief on Tuesday that Sweden no longer have Zlatan Ibrahimovic among their ammunition as Italy prepares for the first leg of their World Cup qualifying play-off.

The 34-year-old De Rossi is one of Italy's three 2006 World Cup-winning veterans – alongside goalkeeper Gianluigi Buffon, 39, and 36-year-old defender Andrea Barzagli – taking part in the last-gasp quest to grab a ticket to the World Cup finals.

Gian Piero Ventura's side travel to Sweden for the first leg on Friday in Stockholm with the return leg in Milan's San Siro on Monday.

“I'd never want Ibra against me, not even at 40 years and with a broken leg,” said De Rossi of Manchester United striker Ibrahimovic, who is currently recovering from injury, but who retired from international duty after Euro 2006.

“The fact that there's no Ibrahimovic is an advantage for anyone who has to face them,” the Roma midfielder told a press conference on Friday.

“It's not that the rest of them are unknown to us though, we know them because some of them play in Italy and others play in important European leagues.”

De Rossi added that the only fear was the fact that Italy could suffer from nerves in their determination not to miss the World Cup for the first time in 50 years.

“We're strong, maybe better than Sweden, but there's a little bit of fear that 'right, we have to deliver',” said De Rossi.

“If the World Cup is important for me, when I've already played three, let's think how important it is for those who have never been there.”

“What's at stake is so imporatnt that the concept of 'blood and sweat' is the right one, we'll give everything but we'll also need composure, organization, technique and we have to run.”

De Rossi will surpass the 116-mark for the number of caps for Italy in Sweden, a figure he shared with former teammate Andrea Pirlo. Buffon holds the all-time record of 173.