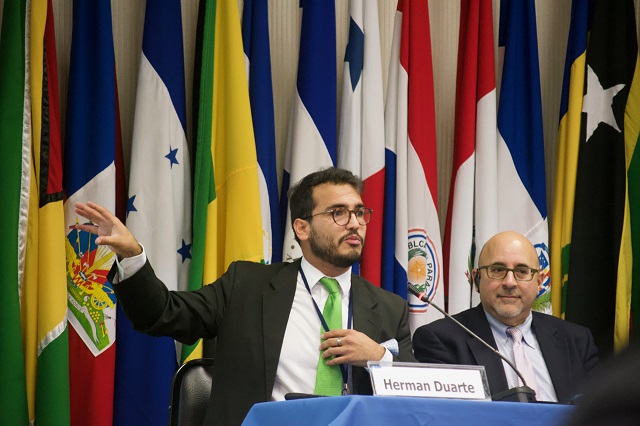 For the first 22 years of his life, Herman M. Duarte lived with a carefully guarded secret.

Coming from a prominent family in El Salvador (his great uncle, José Napoleón Duarte, was president in the late 1980s), Duarte was forced to live according to unwritten expectations governing what was seen as acceptable behaviour.

But then in 2010 he moved to Stockholm to enrol in the International Commercial Arbitration Law master’s programme at Stockholm University.

“For the first time in my life I felt secure. So secure, in fact, that I dared to come out of the closet,” he explains.

“In Sweden you can chose for yourself who you want to be. It's an egalitarian society with a government that takes care of its people. Simply put, Sweden is what democracy should be.”

Duarte recalls a dinner at a Stockholm restaurant with a good friend from the International Law Students Association that truly opened his eyes.

“It was a huge relief to me that he could eat dinner at a restaurant with me and not care at all that I was gay or what the other patrons would think about it,” he says.

Emboldened by the freedom of expression he experienced in Stockholm, Duarte took to Facebook to come out of the closet publicly for the first time and tell the world that he was gay.

The Facebook post went viral, soon attracting more than 50,000 views and dozens of encouraging comments, including a direct message to Duarte from Latin singer Ricky Martin.

However, the lion’s share of comments were negative, with people writing things like “Sweden's turned you into a pervert,” “You're going to rot in hell,” and “You should have kept quiet instead of hurting the people who love you.”

Duarte’s Facebook confession also had serious repercussions for his career. When he returned to El Salvador in 2011, law firms gave him the cold shoulder, despite his qualifications.

“I broke an unwritten rule. If you are homosexual and come from the Salvadoran middle class, you get a quiet type of acceptance as long as you keep it to yourself,” he explains.

While a few law firms did show an interest in Duarte, they weren’t willing to pay him enough to even cover his student loans.

Instead, the then 23 year-old newcomer struggled to find his own clients before finally landing a role at the Costa Rican firm Batalla Abogados.

With confidence and support from his new law firm, Duarte began to work on LGBTQ issues in his home country. He began writing columns in a popular Salvadoran newspaper, challenging the societal norms in El Salvador.

Eventually, the firm helped the emerging LGBTQ advocate strike out on his own, giving him seed money to found HDuarte LEX, the first law firm dedicated to human rights and arbitration, and eliminating discrimination on the basis of sexual orientation and gender identity.

HDuarte LEX was quick to take action, filing a lawsuit against the government of El Salvador for the unequal treatment of its citizens that reached the country’s Supreme Court.

“LGBTQ rights are not about getting special privileges. We don’t want to restrict other people’s rights. We only want to be granted the same rights as everyone else,” he says.

Duarte has since been earning accolades across the globe, becoming the first openly gay Central American lawyer under 30 to be ranked in the famous Chambers & Partners list.

In October, he was in London for a gala to be honoured for being named to the Financial Times’ OUTstanding list of top 50 LGBT future leaders.

And he’s also been named Alumnus of the Year by the Stockholm University Master of International Commercial Arbitration Law for his fight in support of LGBTQ rights in Latin America.

“I cried with happiness when I received this recognition from my Swedish alma mater,” he recalls.

“The things that I learned about litigation in Stockholm University’s master’s programme has been very useful in my work on human rights. I owe a debt of gratitude to Dr Patricia Shaughnessy, the programme director for the Master of Commercial Arbitration Law, especially for her work building close, strong bonds among the students in the programme. It’s meant a lot for me and my work.”

Despite the progress made so far when it comes to promoting and protecting LGBTQ rights in Latin America, Duarte believes more can be done and that countries like Sweden can be a force for positive change in the region and elsewhere.

“I wish that the Nordic countries would have a clearer voice in Latin America and the world,” he says.

“They have so much to give when it comes to issues like democracy, freedom of expression and human rights.”