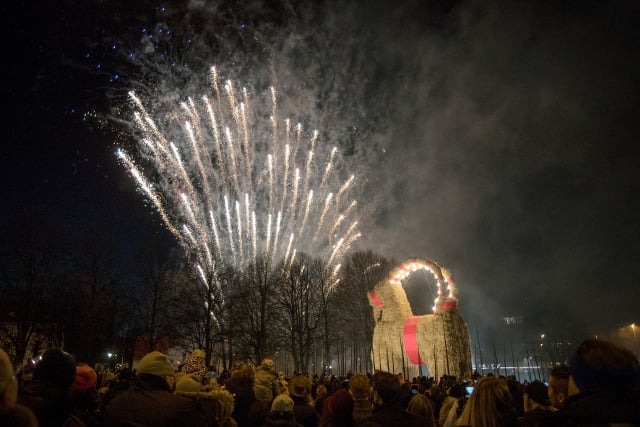 Gävle residents celebrated the 13-metre goat and the start of Christmas season with sparkling fireworks (at a safe enough distance from the straw beast) and music performances on Sunday.

Thank you all for an amazing inauguration show! And a special thanks to the recycling company and the emergency services who kept me and all of my visitors safe during the inauguration. ❤️?? #gävlebocken #lifeisaparty pic.twitter.com/jm1FlnCjNd

On Monday morning it was still standing when The Local checked the town's live goat web camera, but the odds are stacked against it. Since it was first built in 1966 its reincarnations have only survived 14 times, been burned down 30 times and stolen or vandalized seven times. Last year it got burned down only hours after the opening, when one of the security guards went on a toilet break.

“We will have cameras and two security guards in place. We have also put up double fences around the goat, which we hope will make it harder for those who want to carry out sabotage,” Gävle municipality spokesperson Maria Wallberg told news agency TT about this year's plans to protect the goat.

She declined to reveal if other security measures are in place. It's fair to say that the drama of the goat's fate is now at least as big a draw as the goat itself, to the extent that Swedish and international bookmakers offer odds on the goat surviving the holidays.

But according to Wallberg they would rather be without the publicity.

“The fires are not that good for Gävle because many people come here just to see the goat. There are a lot of cancellations once it burns,” she told TT.

Read about the history of the Gävle yule goat and some of the most outrageous attempts to destroy it (including helicopter heists and a gingerbread man wielding a bow and burning arrow) here.