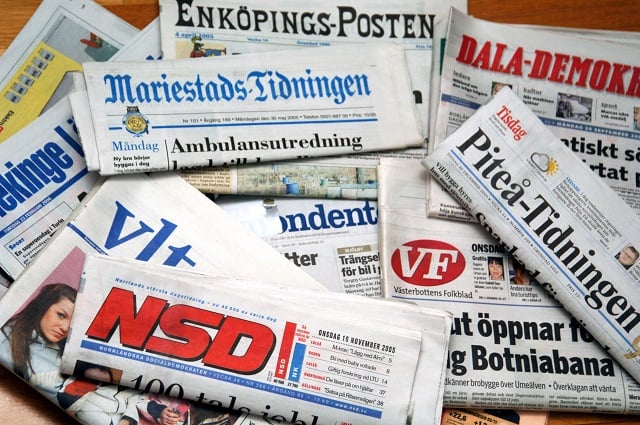 A new law against foreign espionage has been proposed by a government inquiry, which reasoned that some reporting by Swedish mass media could have a negative impact on Sweden’s work with other countries and organizations such as Nato, the United Nations, and the European Union.

The inquiry looks at improving the protection for sensitive data in Sweden generally, and suggests the introduction of a new law, 'gross foreign espionage', with a potential jail sentence of up to eight years. Less serious crimes would be classified as foreign espionage, with a punishment of up to four years in jail.

The aspect of the inquiry which is controversial is the inclusion of news media. Under the new proposal, publications which reveal secret data could be viewed as guilty of foreign espionage.

The report noted that restrictions are already in place to prevent media spreading sensitive data, and therefore claimed that the proposal would be unlikely to affect Sweden's constitutional laws of freedom of the press and freedom of expression.

However, criticism has already been raised, with Johanne Hildebrandt, one of Sweden's best known war correspondents, telling Dagens Nyheter: “The change could make war reporting from the field impossible. If I’m following Swedish troops and see the USA bombing a village so that civilians die, my reporting could be criminalized because it damages Sweden’s relations with the USA.”

“It’s hard enough to report from war zones. The law would lead to decreased insight. Who decides what could damage Sweden’s relationships? Officers and soldiers will say no to journalists out of the fear of making a mistake,” she added.

According to the report’s writers, “there should be no doubt that intelligence services use foreign journalism as a guide to gather information and to have an effect”.

The inquiry notes, for example, that during the Vietnam War, Vietnamese journalist and Time correspondent Pham Xuan An provided intelligence to Hanoi after befriending American journalists and members of the South Vietnamese government.

And according to the Swedish Defence University, cited in the inquiry, Swedish media has also been used for intelligence gathering abroad. One example given is a 2015 interview carried out by broadcaster TV4 by a man claiming to be a Russian scientist, who stressed the value of a “neutral Gotland”, and was “broadcast without challenge”, according to the inquiry.

Another example is Sweden's alleged attempt, reported on by Sveriges Radio which cited classified documents, to sway a Swiss referendum on the purchase of fighter jets in 2014.

A year later, a report in Dagens Nyheter that Swedish soldiers in a United Nations-led operation in Mali had criticized the small food rations caused friction with the organization.

The government inquiry further noted that it's not only Sweden's established media which could pose problems for international relations. It stated that “there’s nothing to prevent Russian or other foreign actors to establish media in Sweden that are then covered by Swedish constitutional laws”, and would then be able to gather information and even act “against Sweden and Swedish interests, the EU and NATO, etc”.

Any media disclosure of sensitive or falsified data, it said, “can have serious consequences for Sweden – and ultimately Sweden's security”.

The law would apply to “espionage-like acts” which cause “substantial damage” to Sweden’s relations with other countries or organizations. It noted that disclosure of sensitive data , because national security was dependent on the security of other countries’ and on effective international cooperation.