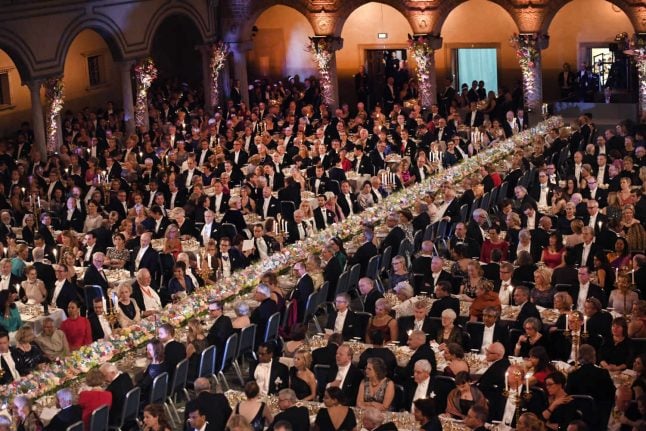 Used for state visits, balls and other large events, the great room in Stockholm City Hall retains a mysterious aura and old-style glamour.

Men are expected to wear a bowtie and tailcoat, women to attend in evening gowns.

For this year's event, the chefs intend to not disappoint Alfred Nobel, an inventor and Swedish industrialist who founded the prestigious awards and who was also known to despise traditional 19th century Swedish cuisine based on meat and potatoes.

This year the Nobel dinner is expected to delight with chic, delicate, and slightly experimental food, offering culinary variations inspired by the northern lights and ice.

Florists and decorators are also inspired by this Nordic theme.

But it's impossible to find out much more as every employee involved in the ceremony must remain tight-lipped and the premises are closed three days before the event to keep prying eyes at a distance.

In the kitchens, accessed through a back door, the chefs are extremely focused on the challenge of serving 1,350 guests, with organisational and logistics skills as important as the ability to produce the perfect souffle.

The cooks have five days to prepare the food.

“The first days are the most important,” explains Tom Sjöstedt, the chef who created the menu for this year's ceremony.

“We start with the tough (work) first and then dedicate ourselves to the details.”

His concern is palpable.

“We know exactly what we have to do. You only get one chance, there are 1,400 (plates) that have to go out, and if it gets botched then it's botched.”

Pastry chef Daniel Roos is more relaxed ahead of what is his fourth banquet.

“The dessert this year is the most advanced,” he says. “I'm going to use a typical Swedish ingredient and a well-known citrus fruit,” eager to discover how the guests will react to what he describes as his “fresh as a Swedish winter” dish.

Starting at 19:00 on Sunday, 190 waiters will serve the guests in the banquet, which will also be attended by Sweden's King Carl XVI Gustaf and his family.

The Nobel Peace Prize will be awarded in Oslo on Sunday.