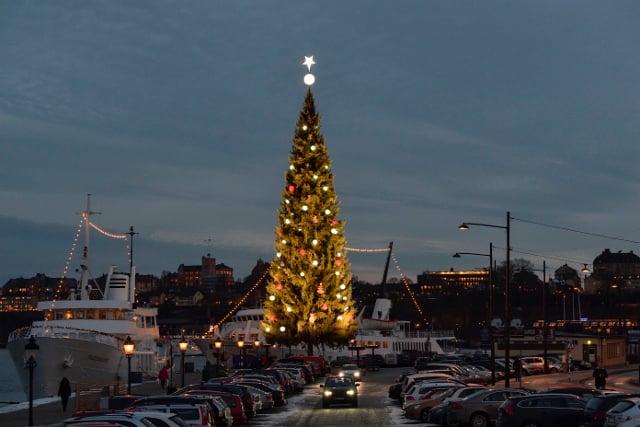 As someone who comes from a country where “The John Lewis advert” is now considered a noteworthy December event, there's something refreshing about the way Sweden seems to have held on to much of the traditional, less commercial side of its Christmas experience.

Simple things like the still basic-looking candles counting down advent are a common sight, while the ubiquitous Christmas stars lighting up every apartment window are far less gaudy than the crazy outdoor lighting spectacle that has increasingly crept into the UK's Christmas culture, via the US.

The old-fashioned Swedish Christmas gnomes (jultomtar) are far less polished and more authentic looking than the Coca Cola Santa who now runs the show in Britain, too.

That's not to say Sweden is completely untouched by the commercial side of things – the race to be the first store to put julmust up for sale is an obvious marketing ploy, and the Black Friday/Cyber Monday nightmare shopping rush is getting bigger here too – but it still feels like older traditions are managing to hold their ground. Christmas really does feel like an entire season in Sweden thanks to the range of different events beside the main day itself. There are usually several opportunities to get out and have a julbord with colleagues or friends for example, while the aforementioned lighting of advent candles are a constant reminder that you're getting closer to the big day and help to keep spirits high.

Then there's Lucia on December 13th, one of the biggest events of the Christmas period aside from the 24th. When I first moved to Sweden I found it odd that so many people who are not religious still celebrate the saint's day, but after a few years living in the country I get it.

Who doesn't like vocal harmonies and, especially at this time of the year when it's so dark, a whole lot of candlelight? Though not religious, I still find the spectacle and theatre to be moving – and the added benefit of lussekatter (saffron Lucia buns) definitely helps.

READ ALSO: The Local's guide to Lucia in Sweden It's hard not to get moved by Lucia celebrations. Photo: Henrik Montgomery/TT

3. The chance to get out

To really appreciate how pleasant the Christmas period in Sweden is, you have to know what comes after.

It's no secret that there's a big contrast between how life plays out in this country in the summer compared to the winter. The drastic difference in weather means that while for one half of the year everyone is out on the streets, sitting at restuarant and cafe terraces, and filling parks until the sun goes down, for the other half of the year people seem to enter a kind of hibernation, never leaving their homes. That's tough if you move here from a city like London, where after work socializing with colleagues and friends is a helpful crutch for getting through the winter.

December is an exception though: parties, Christmas meals, events, Christmas markets, Lucia processions and other festive fare means getting out of the house and interacting is never too difficult at this time of the year. It all more or less disappears from January until spring, so you learn to make the most of the excitement. I have a love-hate relationship with the Swedish snow: while come February I absolutely hate the stuff and can't wait to get rid of it, I still get excited the first time it really comes down and blankets the place – usually around the end of November or early December in Stockholm.

I don't think I'm alone. When the first real snow day comes, people are quickly out on the hills of the local park, sliding down them on their pulka (a classic mini tobogan used for cheap, instant snow gratification) or sled, and you may even encounter a show-off or two who seize the opportunity to do some urban skiing before it all gets cleared. In a couple of months we'll all be complaining, but in the beginning and with Christmas excitement in the air, it's a lot of fun and appeals to the inner child we all have. 5. The brief flurry of social warmth

Whether it's the god jul from a stranger after buying a cup of coffee, or just a quick chat with a neighbour in the hallway about the snow, Sweden definitely feels like a more sociable place at this time of the year.

That's obviously not unique to the Nordic nation – it's part of the Christmas “thing” in general to be be nicer to your neighbours – but in a country where folks are sometimes a bit colder and less inclined to indulge in interacting with strangers, a smile and a greeting or two make a difference. Ah, glögg. Mulled wine is definitely a thing in the UK – it's pretty much the only reason to go to a Christmas market unless you like junk – but we don't really turn it into an excuse to have a party or two like the Swedes do.

A great chance to touch base with friends or family, the seemingly innumerable number of variations of glögg now available means it takes longer to get tired of the stuff (there are even several non-alcoholic variations), and if you're really, really lucky someone will have home-made pepparkakor. Perhaps the best thing about celebrating Christmas here is I get to have two of them, a consequence of coming from a country with a slightly different Christmas calendar from Sweden.

On the 24th, it's the Swedish Christmas celebration, with presents, risgrynsgröt, a proper Swedish meal with sill, Janssons frestelse and the like, then an unhealthy proportion of a box of Aladdin chocolates. There'll be no Donald Duck though. Sorry, I have to draw the line somewhere.

READ ALSO: Donald Duck was Sweden's most watched show of 2016

On the 25th, it's the British celebration, with Christmas stockings, more presents (if I hold my nerve), a hearty meal complete with roast potatoes, stuffing, cranberry sauce and all the trimmings, plus an unhealthy proportion of a box of Quality Street chocolates. There'll be no Queen's Speech though. Sorry, I have to draw the line somewhere.