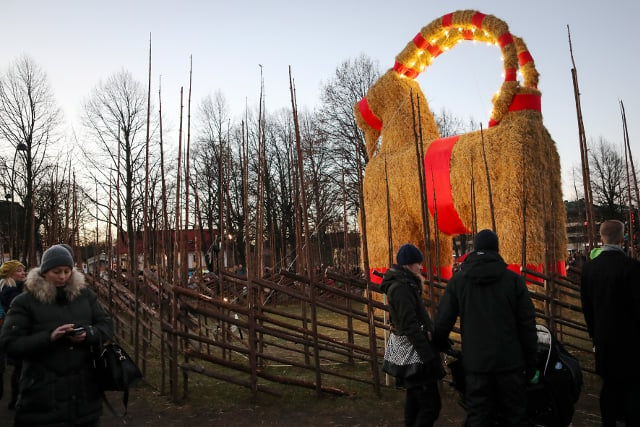 Since the 13-metre goat was first built in 1966 its reincarnations have been torched, stolen or vandalized most years, surviving only 14 times. Last year, on its 50th anniversary, it got burned down only hours after the official opening when one of the security guards went on a toilet break.

But this year it was still standing after Boxing Day, without any attempts on its life.

“It's great that he has been left standing for so long, and I hope he lasts through New Year's,” commented the straw goat's official spokesperson Maria Wallberg to news agency TT.

Gävle has tried various security measures to save the mascot in the past. In 2007 it was soaked in anti-flammable liquid and survived, but locals complained that the chemicals gave it an uglier, darker shade. Security guards and surveillance cameras have not deterred would-be arsonists in recent years.

This year Gävle installed slightly higher-than-usual double fences around the goat, which Wallberg believes are to thank for its survival. “I really believe in stopping these spur-of-the-moment attacks which happen at night when people are on their way home from the pub,” she said.

If it remains untouched the three-tonne creature will be disassembled on January 2nd.

Read about the history of the Gävle yule goat and some of the most outrageous attempts to destroy it (including helicopter heists and a gingerbread man wielding a bow and burning arrow) here.

Looks like I got the best Christmas gift ever: company by Santa Claus himself ?? #gävlebocken #godjul #MerryChristmas pic.twitter.com/ebWe1CiT7n