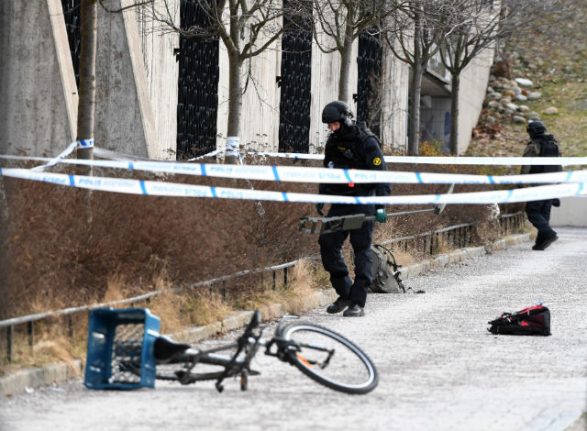 The explosion occurred late on Sunday morning outside the Vårby Gård station, injuring a man in his sixties and a 45-year-old woman.

“There was something on the ground that the man picked up, and then it exploded,” Sven-Erik Olsson of the Stockholm police told the TT news agency.

The man died in hospital in the early afternoon, the police announced on their website.

Stockholm's police force said the man was unlikely to have been purposely targeted by whoever left the explosive at the station. They added that there was nothing to suggest terrorism. A man in his sixties died from his injuries. Photo: Henrik Montgomery/TT

Police said they suspected the blast was caused by a hand grenade, but said it was too early to confirm.

“We can't be completely sure until the technicians have finished their investigation, which will probably be later next week,” said detective inspector Lars Bröms in a statement.

The Vårby Gård station is on the Red Line (Röda linjen) on the way to Norsborg in Stockholm's south west.